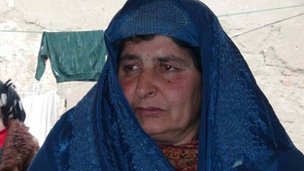 Wali Hazrata is in police custody. She has made no public comment about the allegations.
Continue reading the main story

A woman in north-eastern Afghanistan has been arrested for allegedly strangling her daughter-in-law for giving birth to a third daughter.

The murdered woman’s husband, a member of a local militia, is also suspected of involvement but he has since fled.

The murder took place two days ago in Kunduz province. The baby girl, who is now two months old, was not hurt.

The birth of a boy is usually a cause for celebration in Afghanistan but girls are generally seen as a burden.

Some women in Afghanistan are abused if they fail to give birth to boys. And this is just the latest in a series of high-profile crimes against women in the country.

Late last year a horrifying video emerged of the injuries suffered by a 15-year-old child bride who was locked up and tortured by her husband.

This murder took place in the village of Mahfalay, in the district of Khanabad in Kunduz.

Khanabad’s police chief, Sufi Habib, told the BBC that “the mother gave birth to a third girl two months ago. The husband and mother-in-law strangled her for giving birth to a third daughter”.