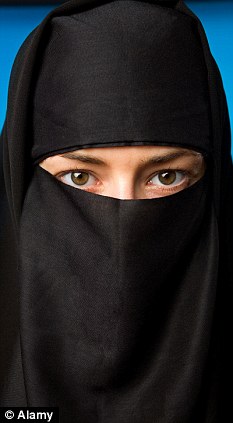 The Muslim woman was wearing a black hijab with a narrow slit showing her eyes. Picture above posed by model

A Muslim woman was barred from serving on a jury yesterday because she refused to remove her veil.

In an extraordinary ruling, a judge said she could not sit on an attempted murder trial because her full face covering, known as the niqab, concealed her expressions.

The woman was about to take the oath in the case at Blackfriars Crown Court in London when the judge interrupted to ask if she was prepared to remove the garment which covered her whole face, apart from a narrow slit through which her eyes could be seen.

Judge Aidan Marron QC, said it was ‘desirable’ that her face was ‘exposed’ during the trial and asked her to remove the veil.

When she refused she was told to stand down and a white male member of the jury pool was sworn in in her place.

In the presence of the rest of the jury, Judge Marron said: ‘I wonder whether I can address the lady who is veiled.

‘Would you prefer not to remove your veil in this particular case?’
The woman, who was wearing western clothing including a fitted grey jacket, replied: ‘Yes.’

Judge Marron added: ‘I entirely understand that, but in this particular case it is desirable that your face is exposed, so I’m going to invite you to stand down. I hope you understand.’

The ruling, which is thought to be one of the first of its kind in Britain, has sparked outrage.

Yesterday Massoud Shadjareh, chairman of the Islamic Human Rights Commission, said: ‘This is totally unacceptable. I really can’t understand why facial expressions could have any impact on the judge, the judgment or anyone else in a trial. It has no relevance.

‘I’m speechless that you can exclude someone on the basis of the way that they dress.

‘It’s very worrying that a judge is being prejudiced against women wearing a veil.’ 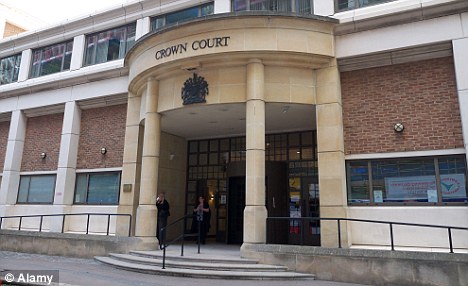