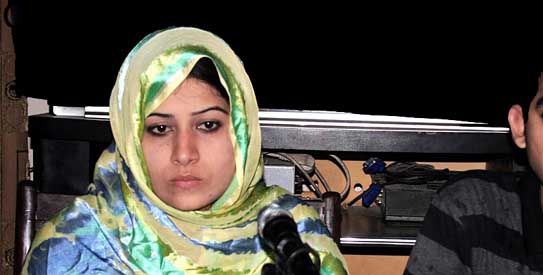 For a newly-wed that has allegedly embraced Islam of her own free will Rinkle Kumari, 18, looked strangely unhappy as she spoke before the Karachi Press Club today.

To say the proceedings were unusual would be an understatement. Kumari was unable to answer journalists’ questions. During the conference she was also passed notes by two people who said they were from an Islamic organization. And she acknowledged that she had never met her husband before marrying him — at that point the conference was abruptly ended.

Her parents allege that Kumari was kidnapped, forcibly converted to Islam, and married to a Muslim man against her will.

Abdul Haq (alias Mian Mitthu), a Member of the National Assembly, has been accused of orchestrating the kidnapping. Police appeared to stand guard during the press conference, and a police escort waited outside.
Visibly shaking, Kumari told the conference: “My name is Syeda Faryal Bibi, I have embraced Islam without any force and have married Syed Naveed Shah of my own free will. Earlier my name was Rinkle Kumari.”

Two bearded men, who said they were from Dargah Bharchundi Sharif, kept passing notes to Kumari, as if… read more.