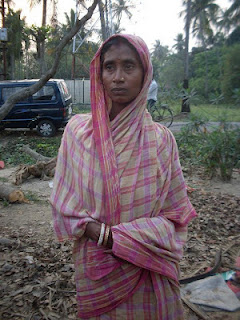 Shyamali Bag was one of the women reportedly
attacked by Islamists in Domjur.

They then returned to Madhyakolra, reportedly with 600 Islamists, who attacked the village and molested many of the Hindu women there.

Reports also suggest that Bangladeshi Muslims may have been involved in the large-scale attack. Domjur is approximately 100 km from India’s border with Bangladesh.
“Hindu women were […] molested, manhandled and thrashed in large numbers,” reports Hindu Janajagruti Samiti. Kolra Maitree Sangha, a local club known for its welfare work, was looted and destroyed.