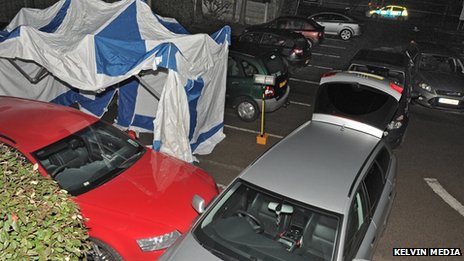 The scene of the shooting in Culcheth

A man has been shot dead after a car was stopped by armed police officers in Cheshire during “a planned operation”.

The shooting happened at about 19:20 GMT on Saturday as armed officers from Greater Manchester Police (GMP) stopped a car in Culcheth.

GMP Deputy Chief Constable Ian Hopkins said officers performed first aid on the man but he died at the scene.

The dead man’s next of kin have been informed. Two other men were arrested.

Witness Jessica Brown, 15, said: “I saw loads of police cars driving past and I saw three men run past the pizza place with gasmasks on and guns and police chasing them.

“Then my friend’s dad came and picked us up and said it wasn’t safe to be out here.

Jessica’s father Anthony Brown said: “I was just putting out my tea when Jessica ran in screaming.

“I went to look but the police told me to get inside. It’s shocking, Culcheth is normally a quiet village.”

One Reply to “Mysterious incident in the UK involving a fatal shooting, gas masks and no names or descriptions given at all.”