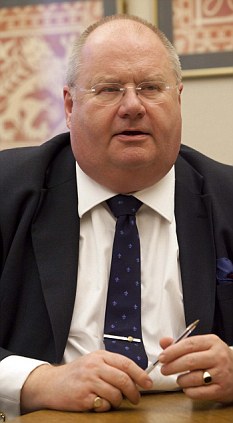 Pledges: Eric Pickles has described multiculturalism as the politics of division and vowed to restore the English language and Christian faith ahead of an announcement today

The English language and Christian faith will be restored to the centre of public life, ministers pledged today.

Communities Secretary Eric Pickles heralded the end of state-sponsored multiculturalism by vowing to stand up for ‘mainstream’ values by strengthening national identity.

He said the government will celebrate what people in England have in common, rather than what divides them.

And he called for local communities to use events such as the Big Lunch or the Queen’s Diamond Jubilee and inter-faith activities to bring together people of different backgrounds.

Mr Pickles said there will be a strategy on community cohesion and integration which calls for people to come together around shared values.

He accused the previous Labour administration, and its equalities minister Harriet Harman, of taking the country down ‘the wrong path’ by encouraging different communities to live separate lives.

Migrants will be required to speak English, the number of official documents translated into other languages will be reduced and councils will be allowed to hold prayers at the start of meetings.

One Reply to “‘We need community cohesion’: Ministers’ pledge to end era of multiculturalism by appealing to ‘sense of British identity’”