And this is the logical extension of social medicine and union-run organizations. Eventually, the bureaucrats will see to it that there is no way that union-members can actually fulfill their jobs and in fact, are better used to obstruct those who do. Others have seen this coming and as far back as the 1980s.

Canada pay close attention. England is your future in so many ways. Obama is creating this now as we saw with Gibson and not Martin guitars due to union and right to work loyalties over productivity and employment.

A charity shop worker drowned in a shallow lake after firemen refused to help for health and safety reasons, an inquest heard today.

Simon Burgess, 41, toppled into the three foot deep water while feeding the swans.

Even when a police officer who had arrived at the scene waded into the water, he was ordered back. 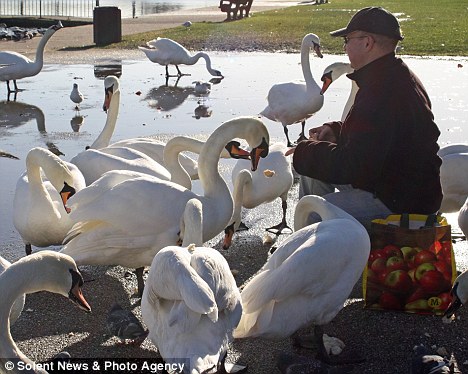 Tragedy: Simon Burgess, right, feeds the swans at the lake in Gosport, Hampshire, where he drowned a few months after this picture was taken

And a witness told the inquest that firemen said they were not allowed into water that was more than ‘ankle-deep’.

Gillian Hughes, 53, said ‘you’re having a laugh’ when firefighters said they could not rescue Mr Burgess. A fireman responded: ‘no, that’s health and safety’.

Instead they waited for a specialist rescue team and Mr Burgess was only taken out of the lake 28 minutes after the alarm was raised in Gosport, Hampshire.

He is thought to have suffered an epileptic fit at around the time he fell into the water. Although he was rushed to hospital he later died.

Ms Hughes told the inquest she phoned emergency services and begged for them to rescue Mr Burgess when they arrived.

She said: ‘I was feeding the ducks with my grandson, sister, and brother when we noticed the man smiling and throwing bread to the swans.

‘He was feeding them from a plastic bag, which blew into the lake and he tried to slap the bag back (towards him) with a plastic lid.

‘The next minute I noticed he was in the water and I shouted for him to get out, I said “You’re not allowed in there”.