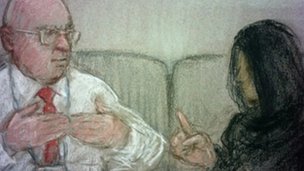 A woman who was allegedly raped and treated as a slave in the UK when she was a girl told a court she could not understand officials when she arrived.

The deaf woman, who cannot be named, told the jury in Manchester that she was spoken to by passport officials when she arrived from Pakistan.

Among the charges they face are false imprisonment and human trafficking.