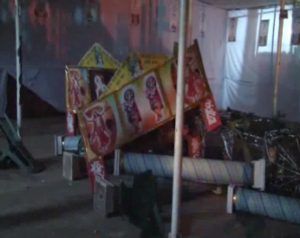 Authorities in the city of Chittagong, south Bangladesh, banned public gatherings on Friday after several Hindu temples were ransacked and vandalized by Islamic extremists. Footage of the temples shows broken windows, overturned and smashed furniture, and even statues and paintings of Hindu deities thrown to the ground or broken.

Hindu-owned shops were also vandalized and looted, reportedly by students of a nearby madrassa, who had gathered following an announcement over the PA.

According to Bangladesh’s bdnews24, “Local people claimed religious bigots of Jamaat-e-Islami and its student wing Chhatra Shibir incited the vandalism and arson of the temples from… read more.