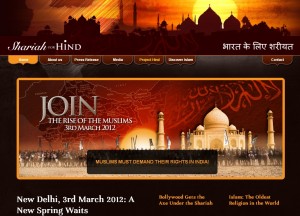 Anjem Choudary, a British Islamist who described himself as “in the camp” of Osama bin Laden, has founded Shariah4Hind (India). Choudary has headed several radical Islamist organizations in Britain, including Islam4UK. All of these organizations were proscribed by the UK Government in 2010. However, despite swearing allegiance to Osama bin Laden on CNN, he has been able to continue his propaganda activities with virtual impunity.

Choudary’s new website comes in the wake of a failed coup in Bangladesh, one of India’s neighbors, by members of the radical pan-Islamic party Hizb ut Tahrir, as well as a successful coup in the nearby republic of the Maldives.

On the Shariah4Hind website, the people behind it say that they are calling the region back to the “period under the divine [i.e., Islamic] law […]. This involves a call for all those in India, Pakistan, Bangladesh and Afghanistan to come out of the darkness of man made law […]” and to sharia.

Another page on the website, entitled “the need for Muslim rule in India,” says that there is broad consensus among Muslim clerics that “it is not permitted for non-Muslims to have… read more.