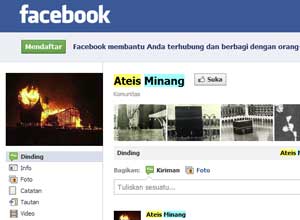 An Indonesian civil servant is facing five years in jail for writing “God does not exist” on a Facebook page, “Ateis Minang” (“Minang Atheists”), that he moderated.

The 31 year-old man, who is known as Alexander, was reported to the police by the Indonesia Council of Ulema, which is not a state organization.

Police have confirmed that they have charged a man with blasphemy in connection to the case.

Dharmasraya Police Chief Sr. Comr. Chairul Aziz told the Jakarta Globe “that the district branch of the council, known as MUI, and other Islamic organizations believed Alexander, 31, had defiled Islam by using passages from the Koran to denounce the existence of God.”

Chairul says that because Alexander cited the Koran in… read more.