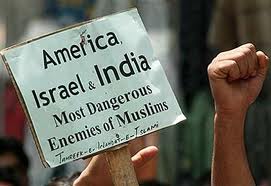 India has been working hard to cement its relationship with Israel lately, consequently upsetting many of the southeast Asian nation’s Muslim organizations. On a recent visit to Israel India’s External Affairs Minister S.M. Krishna described the two nation states as natural allies, and as facing international terrorism.

During the visit, it was agreed that Israel would be allowed to open an embassy in Bangalore.

Mr. E. Aboobacker, national president of the Social Democratic Party of India, (SDPI) said in a statement on Friday, January 13, that “India seeking to forge a joint strategy with Israel to deal with the scourge of terrorism is a big joke as the latter over nine decades has been massacring unarmed Palestinians, including women and children, with impunity.”

“it is pertinent to note,” the Mr. Aboobacker said, “that increasing cooperation between New Delhi and Tel Aviv makes India’s stand on Palestine imbroglio a farce,” adding that the closer cooperation contradicted India’s position on the Palestinian issue.

Prof. Basir Ahmed Khan of the Indian Union Muslim League described the visit as a “travesty of justice” adding that “what Israel was facing is an struggle of Palestinians to free their own country from the illegal occupation of Israel; this cannot be equated with terrorism.”