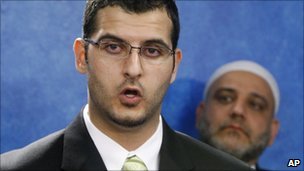 The US state of Oklahoma has been prevented from introducing an amendment that would have barred its courts from considering Islamic law in judgements.

A federal court of appeals upheld a district judge’s decision to block the implementation of the amendment.

The ban on Islamic law was approved by 70% of voters in a referendum in 2010.

But it was challenged by a Muslim community leader who said the amendment violated his constitutional right to freedom of religion.

Muneer Awad, the head of the Council on American-Islamic Relations (CAIR) in Oklahoma, had filed a suit saying that the amendment would affect every aspect of his life, including his will and testament.

The author of the amendment, Republican state representative Rex Duncan, had argued that it was not intended as an attack on Muslims, but was rather a “pre-emptive strike” preventing the application of Sharia law.

But the appeals court backed an injunction imposed by Judge Vicky Miles-Lagrange shortly after the referendum in November 2010, and said Mr Awad had made a “strong showing” of potential harm should the amendment come into effect.

“When the law that voters wish to enact is likely unconstitutional, their interests do not outweigh Mr Awad’s in having his constitutional rights protected,” it said.

Speaking after Judge Miles-Lagrange’s decision in 2010, Mr Awad said her ruling had provided an opportunity to “demonstrate that Oklahoma’s Muslim community simply seeks to enjoy the civil and religious rights guaranteed to all Americans.”