From Peole of Shambhala. 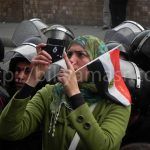 Egypt’s self-appointed morality police was chased off by a group of women yesterday. Modelled after Saudi-Arabia’s morality police, and reportedly financed by the Nour Salafi Party, the “Committee for the Promotion of Virtue and Prevention of Vice” was established in Egypt in December 2011 with the intention of imposing Islamic law (sharia) on Egypt’s women in particular.