From Voice of the Copts: 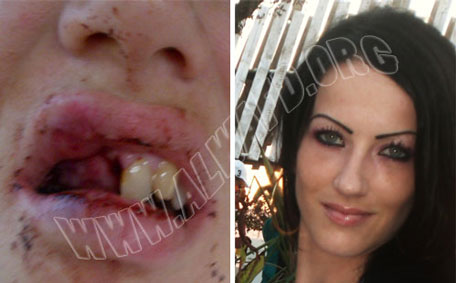 Victim’s face before and after she was attacked by boyfriend. (Al Wafd Newspaper)

A Norwegian girl was brutally attacked by her boyfriend as she refused to marry him.

The lady confirmed the news in an interview with Al Wafd newspaper. She identified her boyfriend as Ahmed AL Ajati, the son of Egyptian millionaire Yahiya Al Ajati.
She said, “The reason behind this was because I refused to marry him and asked him to end our relationship”.

Sulvy said she feared to speak up about her ordeal for fear of being punished more by the businessman and his son.

The incident took place on September 7th when she was in her flat at Ma’adi accompanied by her boyfriend. Sulvy asked him to end their relationship and refused his marriage proposal.

She was surprised by his reactiono as he started screaming hysterically then hit her small dog on the wall and trumpled it under his feet.

She pleaded and begged him to stop, but instead directed his anger towards her. He hit her hard on his face and stomach.