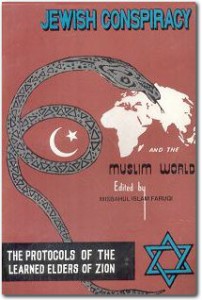 An edition of the Protocols of the Elders of Zion forgery published in Karachi, Pakistan, 1969

Anti-Semitic conspiracy theories have long been a staple of the Arab and Iranian press and consciousness. Haj Amin al-Husseini, an Arab nationalist and “Grand Mufti,” broadcast Nazi propaganda to Egypt during the Second World War. And the Nazi-inspired conspiracy theory of a Jewish-Freemasonic alliance, dominating the world, still appears frequently in the official media today.

For many in the West, the convergence of Egypt’s pro-democracy activists on Tahrir Square earlier this year was a welcome sight – as it should have been. Believing it to be a portent of a new era of liberal democracy and pluralism in the region, however, appears to have been too optimistic.

Reporting was partly to blame. The media covered the sexual assault of American reporter Lara Logan in Tahrir Square by a group of “thugs,” during the protests. But it largely chose to ignore the fact that the crowd was yelling “Jew! Jew!” at her during the assault. Logan was raped with the hands of the assailants while others photographed her with their mobile phones. 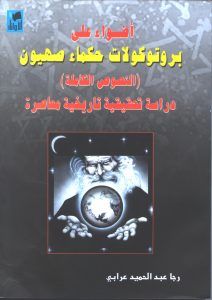 Last week Egyptian presidential candidate Tawfiq Okasha went on television to invoke the other, largely ignored, gentile half of the anti-Semitic conspiracy theory par excellence. Asked why Canadian television presenter Michael Coren had “dedicated a large part of his show to an attack” on Okasha, the presidential hopeful responded, simply, that Coren was “a Freemason.”

Lara Logan isn’t Jewish, and Michael Coren isn’t a Freemason either. But that wouldn’t worry those who believe they are. The truth is a detail. And the Jew and the Freemason are archetypes in extremist Muslim and extremist Arab mind.

Ayatolla Khomeini outlawed Freemasonry after coming to power in 1979. As is occurring in Egypt today, Khomeini managed to subvert Iran’s pro-democracy revolution, and began suppressing every group that did not adhere to his clerical fascist vision. Saddam Hussein, head of the Arab national socialist Ba’ath Party, made membership of the Freemasonic fraternity a capital offense the following year.

The first hint, since the ousting of President Hosni Mubarak, that the Zionist-Freemasonic conspiracy theory was going to inform politics came on… continue reading.