Op-ed: Egypt’s radicals eliminating country’s connection to West, but does

It was barely mentioned in the Israeli and global media, but the following event pertains to the whole of Western civilization: Last Saturday, violent groups of Islamic-Salafi radicals burned the famous scientific institute established by Napoleon in Egypt after its first encounter with the West. Some historians consider it the start of modern times in the Middle East. 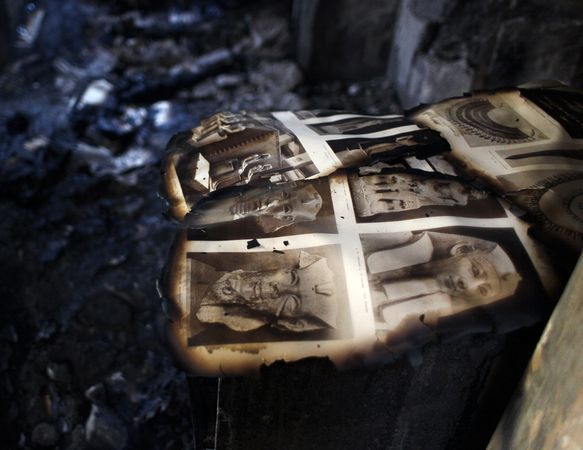 The site, L’Institut d’Egypte, held some 200,000 original and rare books, exhibits, maps, archeological findings and studies from Egypt and the entire Middle East, based on the work of generations of western researchers. Most of the artifacts were lost forever, burned or looted.

It’s difficult to understand the modern Middle East without these studies, which were overcome by an immense fire. The large building was situated in the center of Cairo and torching it was a symbolic, intentional act. Those who burned the building and its artifacts meant to burn the era of logic, enlightenment, research and individualism.

This was a grave provocation against the whole of Western civilization, a desire to disconnect from science, research and modernity, while cynically using a Western means – that is, democracy – in order to take power.

One need not go all the way to blowing up the pyramids, as some of Egypt’s Salafis wish to do after they seized some 35% of the new parliament seats (alongside 40% of the Islamic brotherhood,) and there is no reason to go as far as Afghanistan, where the Taliban blew up the huge Buddha statues. The elimination of Egypt’s non-Muslim past is already here.

Anything that dates back to the Pharaohs, that is ancient, or that is Western is destined to be destroyed, and the mission has already been launched in the most symbolic manner: The outset of Egypt’s modern era, which the Salafis seek to erase, and in fact rewrite. This is a battle for writing the history of Egypt and of the Arab and Muslim world.

This isn’t a new phenomenon, and in Jerusalem as well we see elements associated with political Islam trying to erase any presence of the 3,000-year Jewish existence there, on Temple Mount for example – existence that pre-dated Islam.

In 1258, the Mongols burned the immense library in Baghdad known as the “House of Wisdom.” It held rare writings that have disappeared forever, Plato, Aristotle, Pythagoras, and the other cornerstones of Western civilization. All we know today is that these books existed, yet following the terrible fire in Baghdad they were burned forever. The Mongols sought to secure the same objective as Egypt’s Salafis: Erasing the past and keeping only their present.

All of this is happening while the confused West is lauding the new democracy established in Egypt, without understanding that this democracy is erasing the historic Egypt that was intimately connected to the West and its culture; a new Egypt shall rise on the ruins of the great fire. What we are seeing here is not a battle for power, but rather, a battle for perception, memory, heritage and historiography; that is, the writing of history.

Oddly, this is happening in Egypt of all places, a state that always demanded the return of the archeological findings taken from it as part of its national ethos. Artifacts of the era of the Pharaohs are still held in London and in Paris, yet Israel already returned all the archeological findings it discovered in the Sinai. Now, it is doubtful whether Egypt would be able to safeguard its own museums, which are also facing the threat of fire and looting.

And who is supposed to raise a hue and cry over the burning of Egypt’s Western past? Who is supposed to be greatly disturbed by the fact that Egyptian authorities are having trouble protecting their own museums? UNESCO, the United Nations Education, Scientific and Cultural Organization. Yet not much is happening there. Well, we can’t blame this organization; after all, it is preoccupied with admitting “Palestine” into its ranks.

11 Replies to “Welcome to Cairostan”