As reported in the live-blog earlier today, the high-court judge in Vienna actually quoted an authoritative hadith in the courtroom: “Muhammad’s wife Aisha entered the marriage at age 6, which was consummated at the age of 9.” He then acknowledged that the passage was already public knowledge, and thus repeating it could not be punishable under the law.

He upheld Elisabeth’s conviction, however, based on a somewhat peculiar interpretation of Austrian law: to say “Mohammed had a thing for little girls” is an “excess of opinion” that cannot be tolerated. It constitutes ridicule, and is not justifiable.

An interesting and useful corollary can be derived from today’s ruling: it is now completely legal to quote in public the authoritative hadith about Mohammed’s sex acts with a nine-year-old girl. A precedent was established today — at least in Austria.

The judge’s decision gave one of our Austrian contacts a brilliant idea: rent space on a billboard and blazon that (legally acceptable) statement in four-foot-high letters where everyone in Vienna can read it!

With that notion in mind, I took the liberty of placing the relevant virtual text on an existing billboard in the city of Vienna: 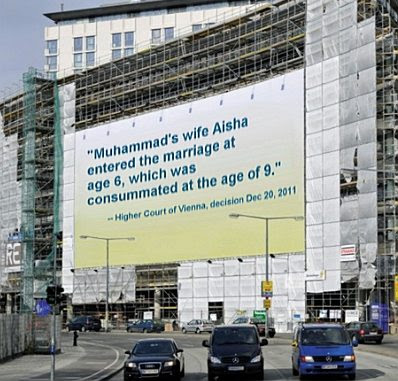 “Muhammad’s wife Aisha entered the marriage at age 6, which was consummated at the age of 9.”— Higher Court of Vienna, decision Dec 20, 2011

An image with the same text in German is below the jump: 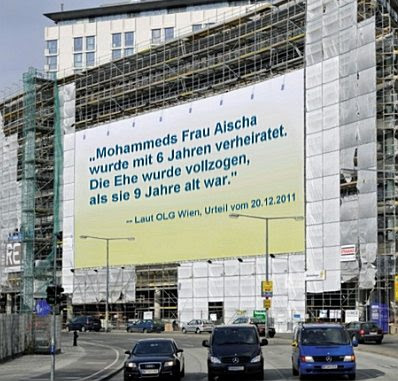 Once again, bear this fact in mind: displaying these words is now completely legal in Austria.

The high court has ruled. It’s on the record. An Austrian can publicly utter, write, chant, print, sing, or declaim those sentences without fear of legal retribution.

This means that Austrians who have enough money and initiative can recover at least a small measure of their freedom of speech, and at the same time educate their fellow citizens about the authoritative teachings of Islam.

5 Replies to “Truth in Advertising”