First, a fairly hand-tipping story about Jews from Persian TV. Remember, nothing gets on TV in Iran that isn’t state policy. Even some things that are, land the actors in jail as we saw from a story a few weeks ago. (I will link later)

Also, it seems that there was a fairly large explosion at an arms depot in Iran today. My money is on an accident while transporting dangerous ornaments improperly. But it could be sabotage by the MEC as just one possibility. Certainly the MEC are who the regime seems most frightened of. 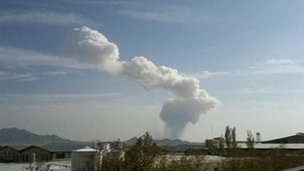 Twenty-seven soldiers have been killed in an explosion at a military base near Iran’s capital Tehran, officials say.

The blast occurred when weapons were being moved inside a Revolutionary Guards depot, a spokesman for the elite unit told state TV.

Windows in nearby buildings were shattered and the blast was heard in central Tehran, 40 km (25 miles) away.

Two hours after the explosion a fire still raged and there were traffic jams on nearby roads, a local reporter said.

Revolutionary Guards spokesman Ramezan Sharif did not say what had caused the “accident” in the village of Bidganeh, near the city of Karaj.

“Some of the casualties are reported to be in a critical condition,” he said.

An emergency worker said that 12 people had been taken to hospital.

Karaj resident Kaveer told the BBC’s Newshour programme that the sound was “deafening”.

“We were kind of shocked. I just ran out of the house and looked around,” he said.

An elite military force, the Revolutionary Guard was set up shortly after the 1979 Iranian revolution to defend the country’s Islamic system.

The rest is at the BBC site linked above

5 Replies to “Two stories out of Iran.”