Of the 1.5 quatrillion octadillion Muslims I am always hearing about, did even one of them get the ‘religion of peace’ memo? 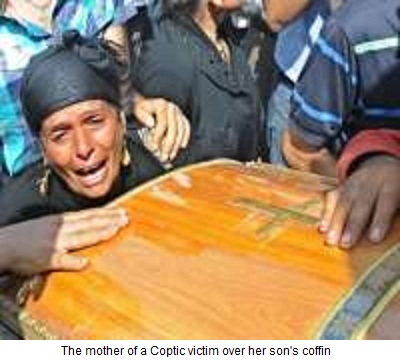 (AINA) — The Coptic Orthodox Church in Egypt issued a statement on October 10, expressing horror at the events of yesterday in Maspero, where 24 Copts were killed and over 200 wounded. The church stressed that the Christian faith rejects violence. The church blasted the government for failing to find solutions to “problems that occur repeatedly and go unpunished.” The Church demanded from all Copts to fast continuously for three days starting tomorrow “in order to have peace in Egypt.”

Some interpreted this demand, which the church has made only three times in its long history, as a way to implore “God’s help for the Copts,” commented Coptic activist and writer Nader Shoukry.

In Cairo, thousands of Copts marched to attend the funeral of the victims of what they termed the “October 9 Military Massacre.” They congregated in front of the Coptic hospital where most of the dead and injured were transported, and which was attacked the night before by Muslims, who hurled bricks and Molotov Cocktails at the victims’ families.

A funeral service presided by Pope Shenouda III was held for the Copts killed in Maspero, at 11 AM at St. Mark’s Cathedral in Abbasiya, Cairo, and was attended by over 10,000 Copts. The funeral was for five Copts only, as the rest of the victims are awaiting for autopsies, on the advice of Coptic lawyers. “This is to safeguard the rights of the dead,” said attorney Dr. Ehab Ramzy, “otherwise the families could lose their case. We need proof.”

After the funeral, while still inside the Cathedral, the enraged Copts chanted “down with the junta rule and down with Tantawi.”

According to priests and Coptic lawyers who were present at the Coptic Hospital, where the victims were brought, the death certificates issued by the authorities were misleading and did not reflect the true cause of death, which might let the assailants get away with the crime. Certificates showed the cause of death as being “stab wounds” and “cardiac arrest caused by fear.”

The families insisted on having the autopsies done, which were carried out on 17 bodies lying in the Coptic hospital. Independent doctors observed those who came from the Public Morgue to carry out the autopsies. 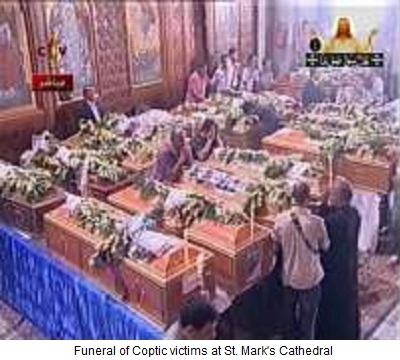 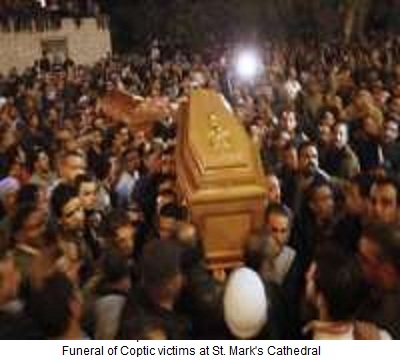 Dr. Maged Lewis, a director at the Forensic Medicine Institute, commented that he had never seen corpses in this deplorable state before. “Bodies were mashed and bones were crushed; many had fractures and laceration of the intestines; while in others, death was caused by gun shots.”

Eyewitnesses reported the army disposed of nine bodies by throwing them in the Nile. Two bodies remain unidentified, making the number of killed uncertain.

After midnight today, friends and relatives of the dead, carried the 17 caskets from the Coptic hospital to St. Mark’s Cathedral for the second funeral service. Near Ghamra bridge, bricks were hurled at the cortege, but the procession carried on to the Cathedral.

The caskets were taken to St. Mary’s Church in “October 6” district, where they laid beside the 12 Copts who died in Embaba, defending their Church against Salafist attacks on May 7, 2011 (AINA 5-8-2011).

On their way back after the burial ,the mourners were attacked by armed thugs who blocked the way and hurled Molotov cocktails at them; gun shots were heard. They sought shelter and called the army emergency phone line for help, they waited until the morning but no one came.

The Coptic Church considers people who lost their lives on account of being Christian as “martyrs” and they will be buried together in a collective grave.