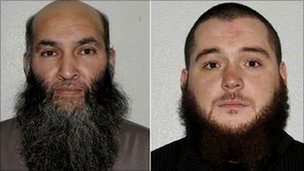 Munir Farooqi and Matthew Newton had denied all charges

Two men have been convicted of trying to recruit undercover police to fight British soldiers in Afghanistan.

They were found guilty after a three-month trial at Manchester Crown Court.

Farooqi, of Longsight, Manchester and Newton, of Stalybridge, Tameside, had denied all charges.

The court heard that Farooqi had travelled to Afghanistan to join the Taliban shortly after the 9/11 attacks and became an “active terrorist”.

On returning to the UK in 2002 he tried to “brainwash” two undercover policemen with extreme propaganda to persuade them to go to Afghanistan to carry on the “jihad”.

It was then that a “delicate” process of radicalisation was begun by Farooqi and Newton, the court heard.

The officers were given propaganda books and DVDs to persuade them to join the jihad cause, the jury was told.

Both officers wore bugging devices to tape the conversations.

Farooqi’s son, Harris, 28, of Levenshulme, Manchester, was cleared of one count of engaging in conduct for the preparation of terrorism.

The jury have yet to reach verdicts on Israr Malik, 23, of Fallowfield, Manchester, who is accused of preparing for acts of terrorism and two counts of soliciting to murder.

Farooqi and Newton will be sentenced at the conclusion of the trial.

3 Replies to “Two convicted of terror planning in Manchester”