a ‘Lebanese and a Gazanian’. Wanna bet it isn’t a Lebanese or Gazanian Christian, Druze or agnostic? 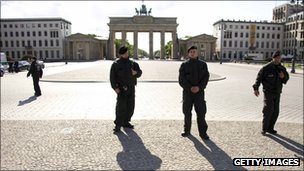 Police in Berlin have arrested two men suspected of planning a bomb attack.

One of the men is described as a 24-year-old German citizen of Lebanese descent, while the other is from Gaza, aged 28.

They had procured chemical substances which could be used to make explosives, a police spokesman said.

Police are searching the premises of an Islamic cultural centre in the Wedding district, as well as the two men’s residences.

The two suspects occasionally stayed overnight in the cultural centre and were frequent visitors to the mosque associated with it, police said.

However, they specifically said the mosque itself was not being searched.

The arrests come just a few days ahead of the 10th anniversary of the 9/11 attacks, and two weeks before Pope Benedict XVI is due to visit Berlin.

Police have not commented on whether they believe the men were targeting a specific event.

The two men had been under investigation for two months, the Berliner Morgenpost newspaper reported.

They had purchased large quantities of coolants and an acid normally used in agriculture, the newspaper said.

The firms selling the chemicals became suspicious because of the quantities the men had ordered, and notified the authorities.

The two men were suspected of planning a “violent criminal act,” police spokesman Thomas Neuendorff said, according to the Associated Press.

The 24-year-old man was overpowered and arrested by special forces on Thursday morning.

German security forces have been on high alert since last autumn, following intelligence warnings of a concrete terror threat, says the BBC’s Tristana Moore, in Berlin.

The German parliament building is still closed to visitors.

According to the interior minister, Hans-Peter Friedrich, up to 1,000 Islamist militants are believed to be living in Germany who could be described as potential terrorists.

A hardcore group of about 100 are classified as dangerous, our correspondent says.