The truth ‘provokes’,   Sarazzin’s facts are “divisive”, his positions are “intolerant and racist”,  that everybody knows,  although no one read the book. The  far left drecks-media and the political elite croak in unison, but Sarazzin is being heard around the world. Leftist apparatchiks like Merkel & Sarkozy will soon be gone, but Sarazzin’s book, ‘Deutschland schafft sich ab’, (Germany does away with itself) and the problem with Islam remains.

The PC empire strikes back

Oliver Marc Hartwich From: The Australian

FORMER career civil servants and central bankers seldom have star potential. Their work rarely excites the public and their pictures do not usually appear on front pages. This would have been Thilo Sarrazin’s fate as well. A former state treasurer in the city of Berlin and director of the German Bundesbank, Sarrazin was mainly known to political insiders. 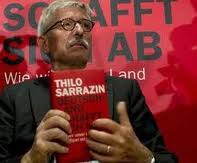 All of this changed last August when he published the book Germany abolishes itself (Deutschland schafft sich ab). Within months the provocatively titled tome of 464 pages, laden with statistics and footnotes, became the best selling non-fiction book in German post-war history. More than 1.5 million copies have been printed to date. Its author developed into an unlikely media star whose name recognition in Germany now surpasses the Pope and the chancellor.

Sarrazin’s media success may be unlikely but it can be explained. In a media society governed by political correctness, he did not play by the rules. Perhaps because Sarrazin was used to speaking his mind behind closed doors he believed he could also get away with it in public. As it turned out, that was too optimistic an assumption.

The main points Sarrazin made in his book were neither particularly new nor were they factually incorrect. Like many authors before him, he pointed out that German society is ageing and shrinking because of low birthrates. He also offered a blistering critique of the welfare state, which he claimed had created a persistent, uneducated underclass.

Sarrazin then dared to suggest that due to the availability of welfare entitlements for the poor and career incentives for the rich the great majority of children are now born to parents from lower socio-economic backgrounds.

Finally, he explained how Germany’s haphazard immigration system had failed to attract high potentials and instead became exploited by poorly educated migrants. The additional point that Muslim migrants are segregating from mainstream society, again backed up by unambiguous statistical data, was the icing on the cake of Sarrazin’s assault on everything that the guardians of political correctness regard as sacred.

The media and Sarrazin’s former colleagues in the political class were quick to condemn the book and its author. The empire of political correctness was striking back.

Before the book had even been released, Chancellor Angela Merkel opened the attacks on Sarrazin. “The book,” she declared, was “not helpful”, as if that had ever been a requirement for new publications. Of course, Merkel had not read it as she was frank enough to admit. Neither did she intend to, as she told a newspaper weeks later.

What was the slogan of George Orwell’s Ministry of Truth in Nineteen Eighty-Four? “Ignorance is strength.” Quite.

Judging by the reactions he provoked, Sarrazin had turned himself from a respected member of society into a political pariah overnight. The witch-hunt did not even stop the chancellor and the federal president from pressuring the Bundesbank, still a formally independent institution, to sack its board member. In the end, however, it was Sarrazin who resigned from his position because he could no longer stand the stress, but not before being formally acquitted by the bank of all allegations of professional misconduct. In this way he also spared his employer from becoming further embroiled in the scandal.

Despite the whole affair it had triggered, the book at the heart of the debate is a remarkably sober account of Germany’s social, economic and political problems. Reading through it, it is hard to understand how this dry and often technical analysis could ever have triggered such passionate reactions. But maybe that is because at the time few commentators gained an unfair advantage over their colleagues by actually reading it.

In this sense, the Sarrazin debate is revealing about the political climate of Germany. Apparently, it is enough to touch on a few taboo subjects to prevent a reasonable discourse. From an Australian perspective, however, Sarrazin’s purported crimes against political correctness are hard to understand. With most of Sarrazin’s positions he would find himself in the bipartisan mainstream of Australian politics.

Welfare reforms in Australia were controversial when first proposed. Started under the Hawke and Keating governments, they were extended under John Howard. Today, a welfare state based on mutual obligations and the principle of employment first are shared by both main parties.

In a similar way, Australia’s basic immigration policies are not disputed between Labor and the Coalition, despite the excitement over illegal arrivals. Both sides of politics recognise that for migration into Australia to be successful it is important to ensure that potential migrants have the language and professional skills necessary to succeed in Australia. Nobody would consider it racist to say that a basic proficiency in English should be a requirement for prospective migrants.

It is quite likely that with these two very basic propositions on welfare reform and immigration policy, widely accepted across the Australian political spectrum, you would be considered an extremist in Germany. The rules of political correctness as applied in many European nations now consider it discriminatory to ask whether migrants can economically contribute to their host societies. And to question the unconditional right to welfare payments is seen as an assault on human dignity.

When a society can no longer seriously debate political issues, controversial as they may be, it is not just a blow to freedom of speech. It also undermines a nation’s capacity for economic reform. Truths may sometimes be painful and feelings may be hurt, but a society that cannot stand vigorous debate risks becoming stale and stagnant.

Sarrazin was not a dangerous extremist but just worried about his country’s future. Rightly so, as the reactions to his book show.

Oliver Marc Hartwich is a research fellow at the Centre for Independent Studies. Thilo Sarrazin will be speaking at the centre’s Big Ideas Forum on August 1. To register visitwww.cis.org.au.

3 Replies to “The witch-hunt against Thilo Sarazzin”