Taken Verbatim from Gates of Vienna: 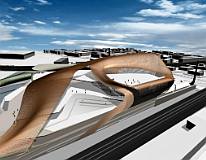 A few months ago it seemed that the local council in Newham had managed to kill the plans for London’s Mega-Mosque. However, government higher-ups have now overruled common sense and breathed new life into Tablighi Jamaat’s mega-project.

Today’s decision by a government Planning Inspector that separatist Islamic sect Tablighi Jamaat may continue to use the current temporary mosque on the site of their proposed Olympic mega-mosque at West Ham has been roundly condemned by local opposition group Newham Concern who say that the decision will provide succour to Islamic radicals and will further boost the capital’s reputation as “Londonistan”.

“For years Tablighi Jamaat have deliberately flouted building regulations and planning laws,” said Alan Craig, Newham Concern’s campaign director and former leader of the Opposition on Newham Council. “After much delay and procrastination Newham Council at last took the right action and told them to move off site. But the Planning Inspector has overturned this and apparently decided that illegality pays and they can stay on site with temporary planning permission for a further two years.

Please click here for the rest of this important press release:

7 Replies to “The Undead London Mega-Mosque”