(AINA) — Muslims broke into the home of a Coptic family this afternoon and abducted their 18-year-old daughter Nesma Sarwat. The home belongs to the building contractor who built the controversial St. Mary and St. Michael church in Talbiya, within the Omraniya neighborhood of Giza. The abductors wrote messages on the home’s wall, the messages said “Islam is the solution” and “The Church has to be demolished.” The abductors also wrote the names of the other family members on the wall.

Neighbors heard voices, but no one saw the abductors as the whole operation took less than ten minutes and blood was found on the stairs and in the flat, reported Coptic activist Mariam Ragy of Free Coptic Voice advocacy. “I believe writing the names of the rest of the family might mean that their turn is coming,” said the neighbor. The Family of the abducted woman called the security forces to the scene.

St. Mary and St. Michael church was the scene on November 24, 2010 of severe clashes between State Security forces and Copts protesting over the closure of their church, during which the forces used tear gas and live ammunition against the protesters, resulting in the killing of three Copts, hundreds of injuries and the arrest of 176 Copts (AINA 11-27-2010);

During the protests in Tahrir Square which, culminated in the ousting of President Mubarak, a period which witnessed the complete absence of the security forces from the streets, the congregation of St. Mary and St. Michael church was guarding the church, which was closed on November 24. On February 6, as soon as a few security officers came back on duty, they stormed the church and evicted the priest and the congregation who were keeping vigil there and holding services praying for peace in Egypt. 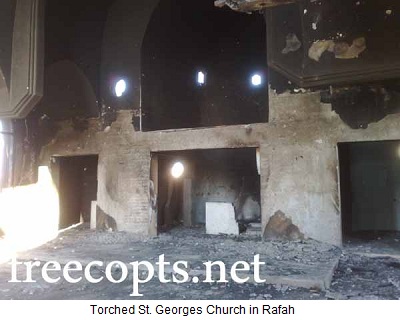 On September 15, 2010, an Islamic Jihadist Forum called Islamic Atahadi (Challenge) Network, which is said to be an affiliate of Al-Qaida, published on its website under the title “Images of the Church under construction in the Pyramids and how to demolish it.” The Forum showed photos of St. Mary and St. Michael church in Talbiya, which was still under construction, gave its members instructions on how to demolish the church by using sugar; “An easy and affordable way for the demolition of the church before its completion, no need for demonstrations, no need for the use of weapons or explosives, you only need to introduce certain quantities of sugar, yes normal sugar.” They went on to explain how to introduce reasonable quantities of sugar inside the forms prepared for pouring the columns, “because sugar affects concrete and cancels the chemical reaction which makes the sand and gravel hold together with the cement.” They advised in their step by step instructions that timing was very important in the process; the best time being immediately before pouring the roof.

Dr. Naguib Gabriel, head of the Egyptian Federation for Human Rights Organization, presented on February 10 a complaint to the Attorney-General on behalf of the people of the Omraniya area, against the Governor of Giza, and the former director of security in, Giza accusing them of being the cause of the murder of three of the Ormaniya Copts and causing sectarian strife.

On February 8 sectarian violence broke out in the hamlet of Elias Hanna, in Samalut, Minya province when some 80 Muslims attacked a number of Copts because they attempted to pray in a house belonging to the Diocese since 2007. The Muslim attack resulted in the injury of 5 Copts. Nearly 6000 Copts living in the hamlet of Elias Hanna and three other neighboring villages have no church.

On February 16 the Church of St. George in Rafah was torched, the walls of the church had writing saying “No to Christians in Muslim Land” (video).

Sectarian tensions broke out on February 17 when Muslims attacked Christians inside the church of Saint Georges in the village of El-Hathatah near Samalout, Minya. This was prompted by the church building a roof over the courtyard between the church and its community services building within the fenced church compound, in order to make more space for its congregation. Muslims surrounded the church and hurled stones. The armed forces were called but without response, prompting the Coptic youth to defend their church.

One Reply to “Muslims Abduct Coptic Christian Woman in Egypt”