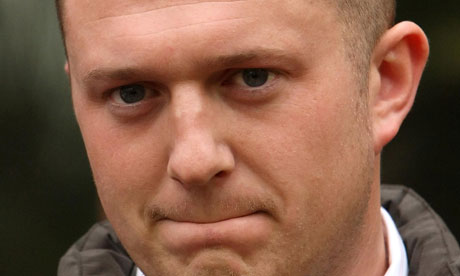 Stephen Lennon, 28, said senior police officers were urging him to leave his home town ahead of the anticipated arrival of thousands of EDL supporters.

The militant anti-Islamist campaigner said he was under police protection. He claimed Bedfordshire police had issued him with an “Osman warning”, which are given by the police to advise individuals that they are at serious risk of being killed by someone who appears to have the capability to make good their threat.

Lennon, who routinely wears a bulletproof vest, said the warning followed a text message threatening to kill his children.

He said a written warning given to him by police states the Islamic community are “agitated” by tomorrow’s EDL demonstration.

The message added: “There is a threat to the life of leader Stephen Lennon. This is likely to be aggravated by the visit to Luton. You would be advised it would more appropriate if you leave the area for the foreseeable future.”

Bedfordshire police, which has been preparing for the demonstration for weeks, declined to comment on Lennon’s claim.

It is understood that an unarmed police officer has been stationed outside Lennon’s home.