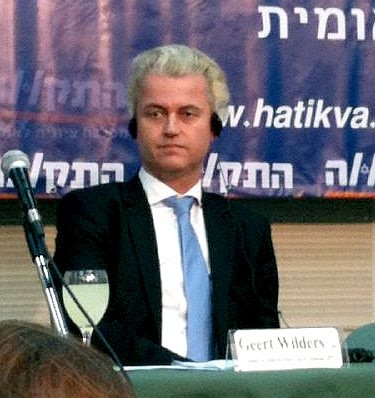 Below is the text of the speech given today in Tel Aviv by Geert Wilders. Update: Thanks to Brian of London for the photo.

Let me start by saying that it is with great sadness that I share your grief over the deaths of more than 40 brave Israelis who lost their lives — many while trying to save others in the great fire near Haifa. My country, the Netherlands, is amongst other countries helping to put down this fire, which is threatening the lives and property of thousands of your compatriots. I offer my heartfelt condolences to the families of those who perished. My thoughts are with them.

Israel is an immense source of inspiration for me. When I came to your country for the first time as a teenager, I lived here for a year.

I am not ashamed to stand with Israel, but proud. I am grateful to Israel. I will always defend Israel. Your country is the cradle of Western civilization. We call it the Judeo-Christian civilization with good reason.

My answer is “No.” The Arab leaders are to be blamed — and Islam is to be blamed. Let me first tell you why, and then I will tell you where Palestine can be found.

At the end of World War II, there were 50 million refugees. Today, all the refugee problems dating from before the 1950s have been solved. All, except one — the problem of the Palestinians.

Please click over to Gates of Vienna for the rest of this speech: