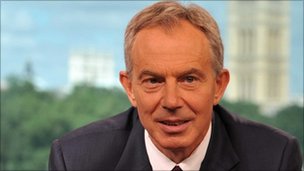 He made the remark in a BBC interview marking the publication of his memoirs.

Mr Blair said radical Islamists believed that whatever was done in the name of their cause was justified – including the use of chemical, biological or nuclear weapons.

Mr Blair, who led Britain into war in Afghanistan and Iraq, denied that his own policies had fuelled radicalism.

Asked about the argument that Chechens, Kashmiris, Palestinians, Iraqis and Afghans were resisting foreign occupation, he said Western polices were designed to confront radical Islamists because they were “regressive, wicked and backward-looking”.

The aim of al-Qaeda in Iraq was “not to get American troops out of Baghdad [but] to destabilise a government the people of Iraq have voted for”, he told the BBC’s Owen Bennett Jones in a World Service interview.

The former British leader – who now acts as the Middle East envoy for the international Quartet – said that Iran was one of the biggest state sponsors of radical Islam, and it was necessary to prevent it by any means from developing a nuclear weapon.

“We need to give a message to Iran that is very clear – that they cannot have nuclear weapons capability, and we will stop them,” he said.

Mr Blair said he was not advocating military action, but simply saying no option could be taken off the table.

Iran denies pursuing a nuclear weapons programme, and insists its atomic work is for civilian purposes.

Mr Blair told the BBC his view of foreign policy had changed as a result of the 9/11 attacks: “After 11 September, rightly or wrongly, I felt the calculus of risk had changed.

“There is the most enormous threat from the combination of this radical extreme movement and the fact that, if they could, they would use nuclear, chemical or biological weapons.

“You can’t take a risk with that happening.”

Mr Blair said he agonised over how to respond to radical Islam and still had doubts that he was right.

These are really difficult issues, he said, but added: “This extremism is so deep that in the end they have to know that they’re facing a stronger will than theirs.”

Mr Blair has also expressed optimism about the prospect of peace in the Middle East. Direct talks between the Israelis and the Palestinians began in Washington on Thursday.

Speaking in Dublin, on the prime-time entertainment programme The Late Late Show, Mr Blair said he believed the Middle East peace process was similar to Northern Ireland – and would be successful.

He said: “I feel it can be settled. You just have to carry on.”

There was a small anti-war protest outside the Dublin studio where the interview took place.

In his autobiography, Mr Blair said Mr Brown was “maddening”, had “zero” emotional intelligence and sought to frustrate key reforms.

However, Mr Blair said there were many things he admired about Mr Brown and would “probably” still go for a drink with him.