Suspects Had Been Cleared Sunday by TSA in Chicago, Birmingham Despite Security Concerns

Two men taken off a Chicago-to-Amsterdam United Airlines flight in the Netherlands have been charged by Dutch police with “preparation of a terrorist attack,” U.S. law enforcement officials tell ABC News. 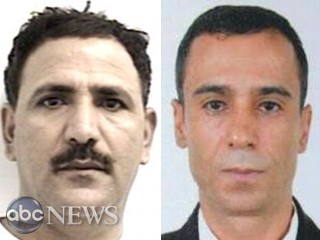 Ahmed Mohamed Nasser al Soofi, left, and Hezem al Murisi, were taken off a United Airlines flight in the Netherlands and have been charged by Dutch police with “preparation of a terrorist attack,” according to a U.S. law enforcement official.
(ABC News)
More Photos

U.S. officials said the two appeared to be travelling with what were termed “mock bombs” in their luggage. “This was almost certainly a dry run, a test,” said one senior law enforcement official.

A spokesman for the Dutch public prosecutor, Ernst Koelman, confirmed the two men were arrested this morning and said “the investigation is ongoing.” He said the arrests were made “at the request of American authorities.”

The two were allowed to board the flight at O’Hare airport last night despite security concerns surrounding one of them, the officials said.

The men were identified as Ahmed Mohamed Nasser al Soofi, of Detroit, MI, and Hezem al Murisi, the officials said. A neighbor of al Soofi told ABC News he is from Yemen.

Airport security screeners in Birmingham, Alabama first stopped al Soofi and referred him to additional screening because of what officials said was his “bulky clothing.”

In addition, officials said, al Soofi was found to be carrying $7,000 in cash and a check of his luggage found a cell phone taped to a Pepto-Bismol bottle, three cell phones taped together, several watches taped together, a box cutter and three large knives. Officials said there was no indication of explosives and he and his luggage were cleared for the flight from Birmingham to Chicago O’Hare.

Once in Chicago, officials say they learned al Soofi checked his luggage on a flight to Washington’s Dulles airport for connections on flights to Dubai and then Yemen, even though he did not board the flight himself.

Instead, officials say, al Soofi was joined by the second man, Al Murisi, and boarded the United flight from Chicago to Amsterdam.

When Customs and Border officials learned al Soofi was not on the flight from Dulles to Dubai, the plane was ordered to return to the gate so his luggage could be removed. Officials said additional screening found no evidence of explosives.

The two men were detained by Dutch authorities when the United flight landed in Amsterdam, according to the officials.