The tiny UK Independence Party helped deprive the Conservatives of at least ten seats by fielding candidates in constituencies the Tories had a good chance of winning.

Nationally, UKIP picked up just 3 per cent of the vote. But in a string of seats their support was enough to stop even Eurosceptic Tory candidates winning.

In the most glaring example, the anti-EU party helped oust the fiercely Eurosceptic David Heathcoat-Amory in Wells, Somerset.

In each case the ministers would have lost their seats if the bulk of UKIP’s support had gone to the Conservative candidate.

Mr Austin, a close ally of Gordon Brown, held Dudley North with a majority of just 649 over the Conservatives, while UKIP picked up 3,267 votes.

The UKIP effect was particularly noticeable in the West Country, where there has long been a strong Eurosceptic sentiment.

As well as Wells, the Lib Dems won in St Ives, Somerton and Frome and St Austell and Newquay after narrowly holding off Conservative candidates with the help of UKIP.

A UKIP spokesman last night claimed the party had deprived the Tories of wins in up to 15 seats, but did not provide a full list.

He blamed the Tories for rejecting an electoral deal in which UKIP candidates would have stood aside in return for a referendum on Britain leaving Europe.

He added: ‘We are not responsible for the behaviour of the Conservative Party who rejected the offer of a deal. The voice of our supporters is important and massive and the only way to teach the Conservatives that is to hurt them.’

BNP is rejected across the country

BNP leader Nick Griffin was ‘smashed’ into third place in his bid to enter the Commons.

He also saw voters overwhelmingly reject his party’s racist policies by kicking them out of most of their seats in local elections.

Griffin had high hopes of success after winning seats for himself and a colleague in the European Parliament last June. 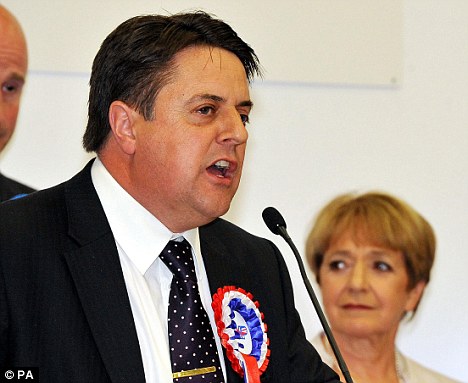 He threw the bulk of his party’s resources into contesting Barking, East London, where his members until yesterday held 12 seats on the local council.

Sitting Labour MP Margaret Hodge however doubled her vote to 24,628 as Griffin trailed in third with just 6,620.

Mrs Hodge said: ‘The message from Britain to the BNP is clear – get out and stay out.’

Nationwide the BNP fought in 326 parliamentary seats, but after most results were declared had seen its support inch up by only 1.83 per cent to little more than half a million votes.

The BNP was comprehensively routed in the local elections. All 12 of its councillors In Barking and Dagenham were toppled.

With two-thirds of local council results declared, it had lost 22 seats – retaining just 14.

Meanwhile, Labour doled out bloody noses to the Tories and the Lib Dems in the local elections. The party seized control of eight extra Town Halls.

Labour was on course to win 300 extra council seats while the Tories were heading towards losing 100 and the Lib Dems losing more than 60.