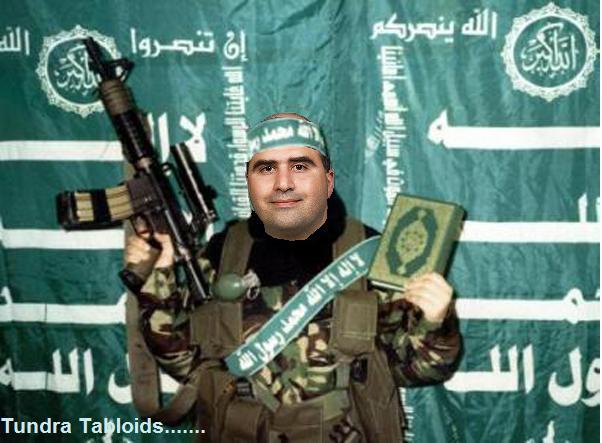 He no “snappy” he just jihad happy!
It’s so damn obvious that even Time magazine is asking questions. Like the Tundra Tabloids has stated time and again, the reason why the present government and political/military establishment are mum on the obvious, is that they buy into the meme that, if they deny any connection with violence to Islam, they’ll in the process deny the jihadis any legitimacy that they represent true Islam.
It’s a mugs game because denying the obvious only increases the likeliness for more terrorist attacks, due to the political correctness that ensues from such hair brained policies. The policy of “the name that must not be mentioned” also does nothing to stop the stealth jihad which happens to be the more problematic of the two jihads. How do you stop the societal takeover by Islam, when you hamstring the people sounding the alarm.
Just take a look what’s happening in the Dutch city of Amsterdam, with the trial of Dutch politician, Geert Wilders, spokesman for the PVV, who is currently on trial for “daring to speak the name that must nt be mentioned”…Islam. KGS

The Fort Hood Report: Why No Mention of Islam?

The U.S. military’s just-released report into the Fort Hood shootings spends 86 pages detailing various slipups by Army officers but not once mentions Major Nidal Hasan by name or even discusses whether the killings may have had anything to do with the suspect’s view of his Muslim faith. And as Congress opens two days of hearings on Wednesday into the Pentagon probe of the Nov. 5 attack that left 13 dead, lawmakers want explanations for that omission.
John Lehman, a member of the 9/11 commission and Navy Secretary during the Reagan Administration, says a reluctance to cause offense by citing Hasan’s view of his Muslim faith and the U.S. military’s activities in Muslim countries as a possible trigger for his alleged rampage reflects a problem that has gotten worse in the 40 years that Lehman has spent in and around the U.S. military. The Pentagon report’s silence on Islamic extremism “shows you how deeply entrenched the values of political correctness have become,” he told TIME on Tuesday. “It’s definitely getting worse, and is now so ingrained that people no longer smirk when it happens.”
(See pictures of Major Nidal Malik Hasan’s apartment.)
The apparent lack of curiosity into what allegedly drove Hasan to kill isn’t in keeping with the military’s ethos; it’s a remarkable omission for the U.S. armed forces, whose young officers are often ordered to read Sun Tzu’s The Art of War with its command to know your enemy. In midcareer, they study the contrast between capabilities and intentions, which is why they aren’t afraid of a British nuclear weapon but do fear the prospect of Iran getting one.
Yet the leaders of the two-month Pentagon review, former Army Secretary Togo West and the Navy’s onetime top admiral, Vernon Clark, told reporters last week that they didn’t drill down into Hasan’s motives. “Our concern is with actions and effects, not necessarily with motivations,” West said. Added Clark: “We certainly do not cite a particular group.” Part of their reticence, they said, was to avoid running afoul of the criminal probe of Hasan that is now under way. Both are declining interview requests before their congressional testimony, a Pentagon spokesman said.
(Read TIME’s cover story on the Fort Hood massacre.)
But without a motive, there would have been no murder. Hasan wore his radical Islamic faith and its jihadist tendencies in the same way he wore his Army uniform. He allegedly proselytized within the ranks, spoke out against the wars his Army was waging in Muslim countries and shouted “Allahu akbar” (God is great) as he gunned down his fellow soldiers. Those who served alongside Hasan find the Pentagon review wanting. “The report demonstrates that we are unwilling to identify and confront the real enemy of political Islam,” says a former military colleague of Hasan, speaking privately because he was ordered not to talk about the case. “Political correctness has brainwashed us to the point that we no longer understand our heritage and cannot admit who, or what, the enemy stands for.”
The Department of Defense Independent Review Related to Fort Hood, ordered by Defense Secretary Robert Gates, is limited in scope. Despite the title of its report — Protecting the Force: Lessons from Fort Hood — there is only a single page dedicated to the chapter called “Oversight of the Alleged Perpetrator.” Much more space is given to military personnel policies (11 pages), force protection (six pages) and the emergency response to the shootings (12 pages).