Good thing Zimbabwe kicked out all its ‘racist’ white farmers and put in more non-racist black only communist people in their place isn’t it? Now we can watch a return to a more natural kind of political control. Found through GAR 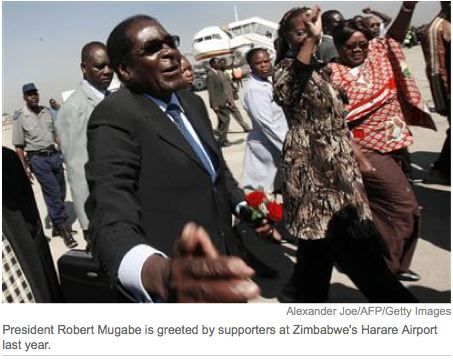 Robert Mugabe, the Zimbabwean president is branded one of the world’s “diabolical masterminds of sexual terror” in a report to be released today on rapes of opposition supporters before last year’s presidential election.

“Ironically, among the few men who have stopped to analyze the unique, destabilizing power of rape are those who use it as a strategy … to control civilian populations and maintain power,” says the study by Aids-Free World, a New York-based advocacy group.

Titled Electing to Rape, the 65-page report draws on testimony from 70 survivors of an “orchestrated campaign of rape and torture” carried out by youth militia, liberation war veterans and others working for Mr. Mugabe’s Zimbabwean African National Unity-Patriotic Front (ZANU-PF) party over five months.

“Striking patterns occurred throughout the testimonies … and cannot be coincidental,” says the report, which will be released in Johannesburg by the group’s co-director, Stephen Lewis, the Canadian activist and former politician, and other officials.

Eighteen of the women held positions as officers within the Movement for Democratic Change (MDC), the main opposition party. Another 47 described themselves as “active” members because they volunteered for its campaigning activities. Thirty of the women also had spouses, parents or other relatives who held significant MDC positions.

“Women … affiliated with MDC were abducted, beaten and gang-raped … and they were told exactly why it is happening to them,” the report says. “These were not random acts of rape and violence.”

Violence against MDC supporters led the party’s leader, Morgan Tsvangirai, to bow out of a run-off election even though he had edged out Mr. Mugabe in the first round.

While the violence was widely reported at the time, the new study offers some of the strongest evidence yet that Mr. Mugabe’s regime systematically used rape as an intimidation measure. In the last decade, rape has come to be viewed as a crime against humanity when committed as part of a widespread attack.

Although the report recognizes Zimbabwe is unlikely to do anything about the rapes, it criticizes South Africa for failing to rein in Mr. Mugabe, once one of the continent’s revered liberation leaders.

South Africa is the only country in the region that has, as a signatory to the UN’s war crimes court treaty, passed “universal jurisdiction” laws that permit prosecution for war crimes committed elsewhere.

“That the national prosecuting authority has declined thus far to investigate allegations of torture in Zimbabwe — despite having been requested to do so–indicates a lack of political will rather than insufficient legal capacity,” the report says.

“South Africa, if presented with credible allegations against Zimbabwean perpetrators of rape who typically enter South African territory, should put aside political considerations and fulfill its legal duty to investigate.”

According to survivors and two witnesses, the attacks usually happened at night.

For page two of this story please click here:

5 Replies to “Mugabe and his rape gangs”