Annually during the first week of December in rural districts of India, hundreds of infants are thrown from the high roof tops ( some of which are as high as 50 feet) of mosques and temples by Hindu and Muslim villagers. The babies are to hopefully land in the safety of sheets and blankets held by the awaiting, celebratory crowd below. If the child survives the fall, it signals a life of good luck, well health, prosperity and a long life (unless you happen to be a baby girl, in which case a long life may or may not be in your future, but that is entirely another story). Singing and dancing abound. 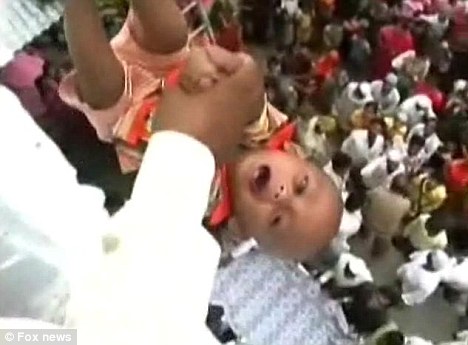 Devotees at a shrine in Harangal village of Parbhani in western India’s Maharashtra dangle the frightened looking baby 50 feet above the cloth sheet below.

I would suspect the twisted logic behind this communal, child abuse jubilee goes something like this: start your child’s life off under the most horrific, sanctioned of circumstances and chances are fairly good (once again, unless you are a girl) that things from then on are bound to improve. All things considered and to be culturally relative and sensitive to those who are inhabitants of the 7th century, it should be duly noted that western cultures do in fact, toss children from high buildings, but ones that are ablaze where children are dropped to the safety of rescue teams. Go figure. The Daily Mail U.K. covered this cruel ritual in an article published this past August.

The good news is India is set to ban this sacred, ceremonial gang baby toss with the hope of enlisting Hindu and Muslim villagers to become residents of the 21st century. I predict hard work ahead.