Here is one case where I agree with the Muslims. I think everyone has a right to refuse medical care for themselves for whatever reason they want. They do not however, have the right to get what care they do want. For example, if a Muslim woman refuses a male doctor for a procedure she absolutely has that right. This does not however mean that a woman doctor has to come rushing to her side dropping all else. She, the Muslim patient, goes to the back of the line, assuming the woman doctor does not refuse to give her service. Or do doctors have that right? From Dutch NIS news: 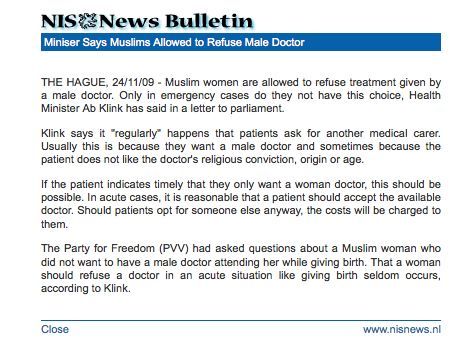 Same goes for a Jewish patient that fears that a Muslim doctor may not give him the same or even safe care at all, as a Muslim patient. He has the right to refuse that doctors care. It may even be a rational reason but it does not need to be. However, this does not mean that doctors in a hospital have to play some sort of macabre game of schedule-shuffle to make sure that each patient has the exact gender, race, culture, height, degree of sexual attractiveness or whatever that a patient demands. I do believe we all have the right to refuse medical care for any reason our little heart can think of (perhaps short of mental health if we are indeed certifiable) but does not oblige anyone else to indulge our prejudices whatsoever.

Of course this isn’t about that at all. In reality, this is about Muslims doing what they do. Making certain that they are seen as, and treated as, a distinct and seperate group from the rest of the host society right up until the host society is forced to deal with Islam as the dominant set of rules. For Holland, this is about 10 years away.

One Reply to “Refusing a doctor a right?”