AN EXCERCISE IN TAQIYYA
AND
MEDIA COOPERATION 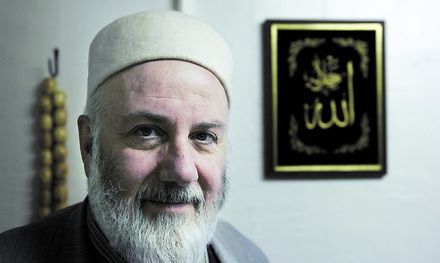 I have the media with me

The blood libel Swedish tabloid, Aftonbladet, published in today’s edition of the paper, a response to yesterday’s op-ed by Sweden Democrat leader, Jimmie Åkesson. The title of the SD party leader’s op-ed had been altered by the Aftonbladet to read “Muslims are our greatest foreign threat”, though he mentioned only Islam. The Aftonbladet nonetheless followed up with publishing an op-ed with an opposing view that could have been written by a representative from either Al-Qaida or the Muslim Brotherhood, (perhaps the latter?)

Imam, Abd al Haqq Kielan, pens one of the more factually challenged (read= total propaganda bullcrap) op-eds on the history of Islam that the Tundra Tabloids has seen in a while, and that’s saying a lot. In alleging that Äkesson was using deceptive tactics in order to gain seats in the country’s house of parliament, Abd Kielan takes to using bogus arguments and out-right lies to bolster his case about Islam being maligned by the Sweden Democrat party leader.

According to Imam Kielan:
Compounding insult to injury, the Imam begins to rewrite Islamic history with such an ease, that one could be forgiven for believing that lying has become second nature to him (Deceit is war).
“The next lie: There has been a war between Islam and Christian Europe in 1 400 years he claims. It is badly-informed study. The first major conflict between Christians and Muslims were the Crusades a thousand years ago. The Crusades were a Western European invasion of the Middle East. Three centuries of bloodshed and terror certainly was not started by Muslims. Even Pope John Paul II has publicly asked forgiveness for the Crusades.”

Contrary to what the lying Islamic cleric states

, the Crusades were a response to Islamic aggression that had been tolerated for a quite a period of time, up until the desecration of the church of the Holy Sepulchre in Jerusalem. Apparently the pope at the time, Pope Urban, considered that outrage to be the last straw.
“From the confines of Jerusalem and the city of Constantinople a horrible tale has gone forth and very frequently has been brought to our ears, namely, that a race from the kingdom of the Persians [i.e., Muslim Turks]…has invaded the lands of those Christians and has depopulated them by the sword, pillage and fire; it has led away a part of the captives into its own country, and a part it has destroyed by cruel tortures; it has either entirely destroyed the churches of God or appropriated them for the rites of its own religion (from the chronicles of Robert the Monk).”
Imam Keilan then tries to draw a comparison with how Jews were treated in Europe in the 30’s and 40’s, to that of Muslims today, a claim that is totally without merit. To be a Muslim in Europe today, as opposed to the life left behind, life couldn’t be better. With a plethora of groups and government agencies there to meet their every need, Muslims are streaming into Europe and to other places in the West at great numbers, something which contrasts greatly to the experience of Jews prior to the outbreak of WWII.

“The argument is upgrded for contemporary use, but the points are nonetheless ominous about the Nazi’s use of language. It is dangerous to play on the strings of hate, we have witnessed time and again in Europe. What begins as a small scale can end up with a great misery.”

The “hate language” Imam Kielan is refering to however, can be sumed up in the following way, “You (Muslims) are more than welcome to live in the West, and as equals within its societies, as well as participate as full members in every sector that that society has to offer. What will not be tolerated however, is the protection of your intolerant monoculture ideology from criticism and ridicule, which at the end of the day, if it’s allowed to attain that special protected status it seeks, will come at the expense of all of our civil liberties.”
That is what upsets this Imam, not any supposed “dangerous language”. He and is fellow Muslims are being demanded to behave like all other members of society, which is totally different to how Jews in Germany were being treated by the National Socialists. German Jews at the time, though fully intergrated into German society, were nonetheless deemed as not being equal members due to their racial heritage. The Imam is throwing up a number red herrings to obfuscate the real issues here.

People are upset that Muslims are over representented in the crime statistics, though no expense has been spared in trying to secure their well being into Western society. People who worked hard and paid their taxes with the notion that they will be taken care of in the old age, are starting to see that dream unraveling as the state spends hundreds of billions of taxpayers’ money upon a people unwilling to fully intergrate themselves into the society that welcomed them with open arms. Nothing is fair and not everything goes according to plan, but creating “Muslim only enclaves”, refusing to learn the host state’s language while whining for yet more rights and privleges for Islam and Muslims, seem to many as a bit too much.

And right now, there is an ever increasing number of Europeans who are demanding that all of its citizens and residents be treated the same under the law. For the overwhelming majority of society it means freedom for all, but for the Imam and his fellow travelers, it means an erosion of Islam’s ´political power base, which means less likely a chance to control the lives of its own members, as well as to spread its destructive influence throughout the rest of society. If that’s the case, I hope everyone will fall under Imam Kielan’s definition of. “racist”, including an increasing amount of Muslims who refuse to be dictated to by the likes of this lying whining Imam. KGS
NOTE: The Imam had to have been given a heads up by the Aftonbladet on the op-ed they planned to publish by the SD leader, Jimmie Åkesson. There was absolutely no way he could have produced a response the same day and have it sent in and published by the Aftonbladet’s staff the following day. No way.