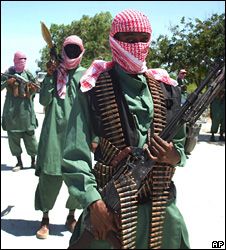 BBC News… Two Islamist groups who were previously working together in Somalia have become embroiled in a fierce fight for control of the southern port of Kismayo.

At least 12 people have been killed and hundreds have fled their homes.

Al-Shabab is reported to have gained the upper hand over Hizbul-Islam, some of whose fighters have left the town.

The two groups have been national allies against the weak, UN-backed government, but tension has been building in Kismayo in recent weeks.

The Islamist pair together control most southern and central areas of the country.

But residents told him it quickly escalated with fighters on the streets of the town using light and heavy machine-guns as well as rocket-propelled grenades.

Some of those he spoke to had already fled their homes and he could hear loud explosions in the background.

“We were attacked by our brothers with no reason,” local Hizbul-Islam spokesman Sheikh Ismail Haji Adow said, according to the AFP news agency.

“They [al-Shabab] launched their offensive on several fronts very early this morning.”

Our reporter says the Islamist groups have been in an uneasy alliance to run the town for almost a year.

The tension escalated through the media, with both sides advising their fighters on Wednesday to ready themselves for possible conflict.

A Hizbul-Islam official warned on Wednesday that if fighting started it would spread across the country, but correspondents say other Islamist leaders may not have the stomach for all-out war.

Our reporter says the fallout could mean that battles erupt in villages and towns around the country where there are joint administrations.

Analysts say it could be a turning point for the embattled government.

At the moment it controls only small areas of the capital, with the help of African Union peacekeeping troops.

He has vowed to implement Sharia but al-Shabab, which is accused of links to al-Qaeda, regards him as a Western puppet.

The country has been wracked by conflict since 1991, when it last had an effective national government.

Some three million people – half the population – need food aid, while hundreds of thousands of people have fled the country.