Susan Rice said his visit to the UN General Assembly later this month had the potential to inflame US emotions. 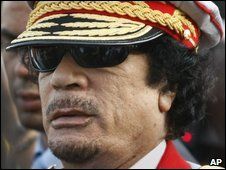 BBC NEWS… The US ambassador to the UN has warned Libyan leader Colonel Muammar Gaddafi to be careful how he conducts himself on his forthcoming trip to New York.

The Libyan welcome given to the man convicted of the 1988 Lockerbie bombing has caused widespread anger.

The Scottish and UK governments are also under fire over the release of the dying bomber on compassionate grounds.

Senior US Senator Frank Lautenberg has called for a Congressional hearing into whether the release of Abdelbaset Ali al-Megrahi was influenced by the prospect of a lucrative oil contract.

UK Prime Minister Gordon Brown on Wednesday insisted no deals were done over Megrahi, and said his release was a matter for the Scottish government.

Mr Brown did not refer to reports that Libyan officials were told by UK government officials that he did not want to see Megrahi die in prison.

Also on Wednesday, the Scottish parliament voted to reject the Scottish government’s decision to release Megrahi.

Megrahi was freed last month, eight years into a life sentence imposed for his part in the bombing of Pan Am flight 103 over Lockerbie in December 1988, killing 270 people.

Suffering from terminal cancer, Megrahi has had chemotherapy and is now in a cancer ward at a hospital in Tripoli, the BBC understands.

“It goes without saying that virtually every American has been offended by the reception accorded to Mr Megrahi in Libya upon his return from the UK, ” Ms Rice told reporters.

“This is a very raw and sensitive subject for all Americans, having lost 270 of our compatriots in a terrorist act,” she went on.

“How President Gaddafi chooses to comport himself when he attends the General Assembly and the Security Council in New York has the potential either to further aggravate those feelings and emotions, or not.”

This will be Col Gaddafi’s first appearance at the 192-nation General Assembly, being held later in September at the UN headquarters.

He is due to address the gathering of world leaders directly after US President Barack Obama has spoken.

He is also expected to make a speech at a meeting of the UN Security Council, which will discuss nuclear non-proliferation and nuclear disarmament.

Ms Rice said all heads of state were expected to stick to the theme of the meeting and speak for no more than five minutes. “We expect no less from President Gaddafi if he comes,” she said.

Last week, Libyan officials agreed not to pitch Col Gaddafi’s Bedouin-style tent in the grounds of a Libyan-owned property in the New Jersey town of Englewood following heated protests from residents. Dozens of families in the area lost loved ones in the bombing.

It is thought Col Gaddafi and his entourage will stay in Manhattan.