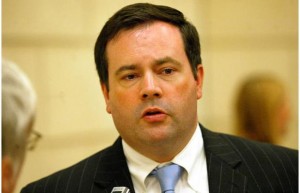 National Post… CALGARY — Federal Immigration Minister Jason Kenney says he’s frustrated by difficulties in deporting dangerous foreign criminals from Canada, adding changes to the law may be needed as lengthy delays and appeals could undermine public confidence in the system.

Mr. Kenney said this week that the public expects “that once a decision’s been taken — that someone is a gangster or a serious criminal, and they’re a foreign citizen — that the appeals don’t go on forever.

“There has to be a point where Canada says, ‘I’m sorry, you’ve abused our generosity, you violated our laws, you pose a danger to our country, and you’re out of here.'”

Mr. Kenney’s remarks came after alleged Calgary gang member Jackie Tran was ordered released from custody this week on the heels of an emergency stay of his deportation order to Vietnam.

During the past 18 months, Mr. Tran’s case has been dragged through appeals and a judicial review — and there is no sense yet of when, or if, the 26-year-old man will be deported.

Mr. Tran was sentenced to two years less a day for trafficking offences in 2000 and ordered to pay a fine for a 2002 assault, meaning his sentence was 24 hours short of the legal benchmark for “serious crime.”

Under the Immigration and Refugee Protection Act, “serious criminals” — those sentenced to two years or more in prison — are not allowed to appeal their deportation orders, his lawyer has said.

Mr. Kenney noted he wasn’t speaking specifically of Mr. Tran’s case, but said he was to be briefed on it this week.

Changes may be needed, he said on Wednesday, and those could mean amendments to the law, including the Immigration and Refugee Protection Act.

Calgary police have been calling for a review to tighten what they say are legal and procedural loopholes that allow for multiple appeals and judicial reviews of deportation orders.

On Saturday, a federal judge granted a stay of Mr. Tran’s deportation order, pending a review.

Then on Wednesday, he was ordered released from custody by an immigration board member — who said Mr. Tran didn’t pose a flight risk as his deportation was no longer imminent, nor was he a danger to the public.

Tran’s lawyer, Raj Sharma, said there have been no unreasonable delays in Mr. Tran’s case.

Mr. Sharma noted an immigration appeal decision that his client should be deported came down only five months ago and Mr. Tran is seeking a judicial review of that ruling.

He will also seek a judicial review of a separate decision, handed down on Tuesday, which found that while Mr. Tran denies gang membership, he admitted to socializing and being friends with some members of the FOB Killers gang.

That gang has been locked in a bloody feud in Calgary with the rival gang FOB.

Mr. Sharma said his client is simply using the legal avenues available to him, remedies that sometimes prevent injustices from occurring.

“No one’s going to argue with Minister Kenney that unreasonable delays for removing individuals with serious criminal convictions may undermine the system,” Mr. Sharma said.

“But at the end of the day … these are the legal remedies that [Mr. Tran is] entitled to. He’s entitled to seek review of these decisions.”