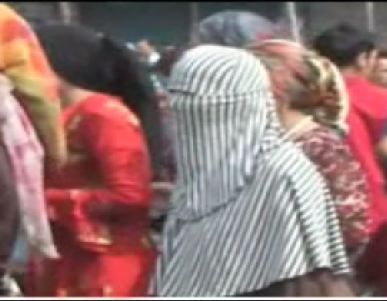 one of the Huiger rioters

Mosques in the riot-hit capital of China’s northwestern Xinjiang province have been ordered to stay closed for Friday prayers in the wake of recent ethnic violence, media reports quoted Chinese officials as saying.

An official who identified herself as a government worker but refused to give her name was quoted as saying the decision to close mosques in Urumqi had been made for public safety and that “people should stay at home today and pray.”

Separately, officials in the province’s southwestern city of Kashgar have told visiting journalists that they and other foreigners had to leave the city.

The city’s foreign affairs office said that although the city has had no unrest, the decision was made to ensure the safety of the visitors.

At least 156 people have died in ethnic violence between Han Chinese and minority Muslim Uighurs in Xinjiang since Sunday.

The protests started in Urumqi, when demonstrators gathered to demand justice for two Uighurs killed in June during a fight with their Han co-workers at a factory in southern China.

Officials have said that more than 1,000 have been injured and about 1,400 have been detained.

Hundreds of vehicles, stores and street vendor stalls were also damaged or set ablaze during the protests, officials said.

In response to the riot, hundreds of Han Chinese rampaged through the city Tuesday with sticks and meat cleavers, looking for Uighurs and revenge.

The Uighurs, an ethnically Turkic, predominantly Muslim group, make up the majority in Xinjiang.

Their relations have often been tense with the ethnic Han Chinese who predominate in the country. Many Uighurs feel they’re discriminated against by the government in Beijing and a Uighur separatist movement has existed for decades.