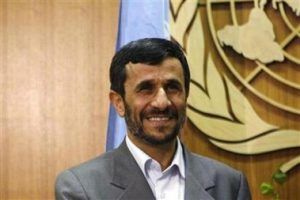 TEHRAN (Reuters) – Iranian President Mahmoud Ahmadinejad called the Holocaust a great deception on Wednesday, reiterating a view that has been denounced by moderate rivals in this month’s election.

The conservative president, quoted by state broadcaster IRIB, made the remark during a speech containing his latest verbal assault on Israel, which the Islamic Republic does not recognize.

Describing Israel as “the most criminal regime in human history” he went on to refer to the “great deception of the Holocaust.”

Ahmadinejad’s critics, including reformists and even some fellow conservatives, say his fiery anti-Western speeches and his questioning of the Holocaust have isolated Iran, which is at odds with the West over its nuclear ambitions. Tehran says its nuclear work is intended for peaceful purposes only but the West fears it is pursuing a secret military program. Ahmadinejad has hit back at his opponents, who include former Prime Minister Mirhossein Mousavi, accusing them of trying to weaken the Islamic state by wanting a policy of detente with the West.

Ahmadinejad came to power in 2005 vowing to share oil wealth more fairly and a return to Islamic revolutionary values. He caused outrage in the West the same year by saying the state of Israel should be wiped off the map.

His domestic critics say the president’s economic policies, including profligate spending of the country’s petrodollars, have increased inflation.

Ahmadinejad has rejected the criticism, saying Iran’s economy is in a better shape than those of its Western foes.

Last month in Geneva, he prompted a rare walk-out at the United Nations when he called Israel a “cruel and repressive racist regime” in his remarks to a conference on race.