Turkey is flexing its new geopolitical muscles by blocking the appointment/election of  Danish Prime Minister Anders Fogh Rasmussen to be NATO’s new secretary-general. While Germany is insisting it be no one else, Turkey is demanding it must be anyone else. 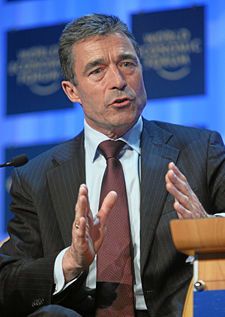 Turkey’s objections has to do with Anders involvement with the publication of the now famous Danish cartoons lampooning things Islamic. In essence, Turkey is now demanding that NATO submit to Muslim sensitivities. This is not the thin edge of the wedge, this is the middle. If NATO caves in to religious rules and arbitrary ones at that, the question of NATO’s actual mission becomes fuzzy at best.

Bill Cosby once said something which in situations like this I feel are perfectly applicable.

“I don’t know the key to success, but the key to failure is trying to please everybody.”

Every NATO member state has veto power over new secretaries-general, meaning Ankara and Berlin may be heading toward a showdown — a showdown Turkey may be orchestrating to force the United States to take its side, putting pressure on U.S. President Barack Obama to choose between key allies early in his presidency.

Also according to Stratfor:

The current Dutch secretary-general, Jaap de Hoop Scheffer, has said he will leave the post when his mandate ends July 31, although the current impasse could see his mandate extended. The leading contenders to replace him thus far have been Rasmussen, Canadian Defense Minister Peter MacKay, Polish Foreign Minister Radoslaw Sikorski (who has since withdrawn his candidacy) and Norwegian Foreign Minister Jonas Gahr Stoere. From the U.S. perspective, any of the proposed candidates would be a great choice, though Rasmussen seemed like the best candidate because he was still palatable to the main European power players, Germany and France, despite Denmark’s unflinching alliance with the United States

In all, Turkey seems to be using the now well known Islamic sensitivities to try and force western nations and organizations to submit to Turkish demands saying a great deal about the rise both of Islam in the world and how Turkey sees itself as a resurgent geopolitical force.