While this is almost certainly pure bullshit, Ill post it here because it’s sufficiently disgusting that any organization would want to claim ‘credit’ for this sick sad massacre. 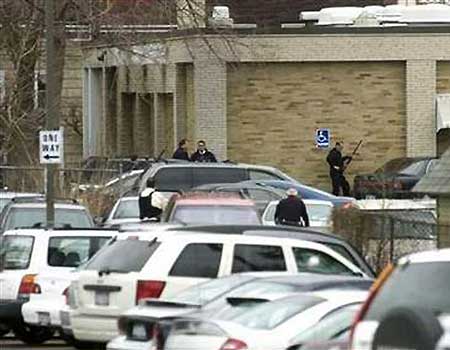 A Pakistani Taliban militant leader has claimed responsibility for the attack on a U.S. immigration center in New York state in which 13 people were killed, Reuters reported.

“I accept responsibility. They were my men. I gave them orders in reaction to U.S. drone attacks,” Baituallah Mehsud told Reuters by telephone from an undisclosed location on Saturday.

Click here for taped video from the scene from the Binghamton Press Sun & Bulletin.

U.S. officials were not immediately available for comment about Mehsud’s claim, Reuters reported, and one Pakistani security analyst dismissed the claim as a publicity stunt.

Representative Maurice Hinchey, whose district includes Binghamton, told the New York Times that indications are the gunman was an immigrant from Vietnam.

The U.S. is suspected of carrying out more than three dozen such strikes over the past year in Pakistan near the Afghan border, where militants often launch attacks against U.S. and NATO troops. The drone attacks have caused tension with the Pakistani government, which frequently complains about the U.S. carrying out strikes on its territory.

President Barack Obama has said he will step up the pressure on Pakistan to crack down on militants in its territory by making aid to the country conditional on the government’s anti-terrorism efforts. Pakistan has said it is committed to the fight, but many Western officials suspect the country’s military intelligence agency of maintaining links with militant groups.

Obama said last month the U.S. would insist that action be taken “one way or another” when the country has intelligence about high-level terrorist targets in Pakistan, a likely reference to the drone strikes.

Pakistani President Asif Ali Zardari defended his country’s commitment to fighting Islamic militants in a speech marking the 30th anniversary of the execution of Zulfiqar Ali Bhutto, an influential former prime minister who was hanged by a military regime on charges widely seen as politically motivated.

“People around the world say that our country will disintegrate. Some say that fundamentalists will rule the country,” Zardari told thousands of people who assembled early Saturday morning at the slain politician’s tomb in southern Sindh province.

“But we will not let it happen as long as we are alive,” said Zardari.

Bhutto was the father of Zardari’s late wife Benazir Bhutto, a former prime minister who was assassinated by militants at the end of 2007, not long after returning to the country from exile to run in national elections. Pakistan and the U.S. have blamed Mehsud for Benazir Bhutto’s death and scores of other attacks in Pakistan.

Earlier this week, Mehsud claimed responsibility for a deadly attack on a police academy in the eastern city of Lahore that left at least 12 people dead, including seven policeman. He warned that his group would carry out more attacks in the country unless the U.S. stopped drone attacks against militants on the Afghan border.

The militant leader also threatened to attack the White House, although the FBI said he had made similar threats previously and there was no indication of anything imminent. The U.S. has offered a reward of up to $5 million for Mehsud.

Soon after Mehsud made his threat, a suspected U.S. drone fired two missiles Wednesday at the alleged hide-out of one of his commanders, killing 14 people, intelligence and local officials said.

The Associated Press contributed to this report.