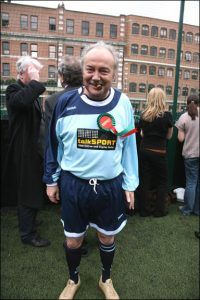 By Rob Breakenridge, For The Calgary HeraldMarch 31, 2009

As the nation’s media waited with bated breath, a federal court judge ruled Monday that controversial British MP George Galloway would not be coming into Canada.

However, in a somewhat-less-ridiculous world, whether some blowhard Brit addressed a few dozen radical antiwar types would matter not a whit.

Indeed, visits to Canada by Galloway in 2005 and 2006 warranted scant attention, and a speech just last week in New York drew only about 100 people –including the Canadian reporters who were there because of this controversy.

At least according to this judge, Ottawa’s decision to deny Galloway entry into Canada was legally correct, but it was also a needless decision and, frankly, the wrong one.

This is more about the rights of those Canadians who invited him here to speak: freedom of speech obviously entails the freedom to hear.

Justice Luc Martineau was right to say that “non-citizens do not have an unqualified right to enter . . . Canada,”– but Galloway is no “threat” beyond the queasiness one might feel after listening to him. Although Galloway’s defenders are in the right here, their sudden zeal for freedom of speech seems to me to be very sudden indeed.

In fact, many of Galloway’s supporters–including his biggest fan (himself) –ought to avoid the words “free speech” altogether, be-cause we can easily see how spectacularly uncommitted they are to the very notion.

Not two months ago Galloway had some rare and enthusiastic praise for the British government: specifically, a decision to deny entry to controversial Dutch politician Geert Wilders. I’m sorry, but if it’s a wonderful thing that the U. K. shut its doors to an outspoken politician, then Galloway ought to have immediately acquiesced to the Canadian decision.

From there, it’s a trickle-down effect: James Clark with the Toronto Stop the War Coalition helped organize Galloway’s visit and is part of a website called Defend Free Speech, which seems to apply only in this case. Clark never once uttered “defend free speech” during the Danish Muhammad cartoon controversy and the prosecution of Ezra Levant for republishing those cartoons–Clark’s group was among those participating in protests against freedom of expression in this case.

This man is going to lecture us on the importance of freedom of speech?

As for George Galloway, the CIC maintains that people should be free to “draw their own conclusions” about what he has to say. The spectacle of the CIC leading the charge for freedom of speech is certainly absurd, but the depths of their hypocrisy reach even deeper.

In 2007, the Fraser Institute held a conference on immigration, security and terrorism which included a speech by Egyptian-born British author Bat Ye’or.

Did the CIC feel that Canadians could “draw their own conclusions” about what Bat Ye’or might have to say? Of course not: it demanded Bat Ye’or be banned from Canada.

Then there’s the NDP. Given the support for the CIC case against Maclean’s from NDP Leader Jack Layton, I’d immediately be suspicious of NDP support for free speech. But sure enough, it is on the bandwagon, too. Immigration critic Olivia Chow argues that just because some might not like what Galloway is going to talk about, “that is not a reason to keep him out.”

It’s not? That’s funny, because last year the NDP was demanding Canada keep out members of the anti-gay Westboro Baptist Church. Yes, Canadians–and pretty much everyone–don’t like what they have to say, but I thought that was not a reason for keeping people out.

Galloway’s supporters are certainly entitled to keep challenging the government’s decision, and I wish them well. However, they have no business lecturing the rest of us on the importance of freedom of speech.