Thanks to The Frozen North for exposing this little bit of legal and politically correct horror.I had to email the blog that broke this story asking for an original link. Not so much because I didn’t believe it in fact its more unbelievable when this sort of capitulation to Muslim pressure groups does not occur. However for detractors, one needs a link to a credable news source, which usually means news sources which deliberatly avoid exposing Islamic influence in the west. In any case, the newspaper that carried this story does not have an electronic version and the blog linked above was kind enough to photograph the whole story in the original newspaper and post a link to see them all on photobucket. Thank you Frozen North for doing that very much.

Below find the story and a couple of the photos:

Scottish forces ordered to give priority to crimes against Muslims

Police in Scotland have been ordered to give special priority to crimes where the victims are Muslim.

In a move that last night sparked a fresh row over political correctness, a senior officer revealed that the race and religion of a victim has now become a crucial factor in how police respond to crime.

Inspector Tom Galbraith, of Lothian and Borders Police’s diversity unit, told a conference on tackling terrorism that it was important to stop Scottish Muslims feeling “vulnerable” in case they were driven towards radicalism.

Mr. Galbraith said the force encouraged officers to consider the religious or ethnic backgrounds of victims to assess their needs in dealing with hate crimes.

He said that both an attack and a perceived lack of action by police could turn Islamic youths into future terrorists.

Mr. Galbraith also revealed that police officers, Special Branch and BAA security staff were being given special lessons about Islamic culture after Muslims complained that being questioned when entering the country about whether they pray and attend mosques was offensive to their faith.

Speaking at a national security conference in Edinburgh on Thursday, Mr. Galbraith said, “It is not about treating everybody the same.

If I have a young Asian man who has been subjected to a hate crime, I would rather put more resources into that than if it had happened to a white male because the white male is far less likely to end up becoming radicalised.”

He later confirmed that his remarks were in line with Lothian and Borders Police policy, saying that cases of hate crime were assessed “by need”.

He added: “You have to consider cases according to need.  The idea of treating people all the same is a bit naive and we have to remember that there are vulnerable individuals who can be put on the path of radicalism.”

Last night, the police were criticised for being too politically correct in dealing with hate crimes.

Conservative Justice spokesman Bill Aitken said: “I’m afraid we are now living in a society in which some people are more equal than others.

“Not accepting assault against some people is a serious matter and the law is required to be proactive in each and every case.

“There is no room for political correctness in the fight against crime.”

Richard Cook, Scottish spokesman for the Campaign Against Political Correctness, added: “I think people will be extremely concerned that victims are being treated differently according to their religion, colour of their skin and where they live.”

During the conference, Mr. Galbraith also said that police officers and airport security staff were being given lessons in Islamic culture to avoid offending arrivals.

He said: “Sometimes they will be asked “Do you pray?” or “Do you visit mosques?” when they arrive in the country.

“This kind of thing is derogatory to the Islamic faith.  A lot of people then wonder what is wrong with going to mosques in this country.

“It is about making an effort in learning about other cultures and faiths.”

He later confirmed that training in Islamic culture was now on-going among officers.

He presently works in the diversity unit under the “prevent” strand of the UK counter-terrorism strategy. 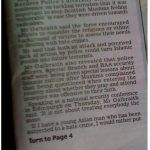 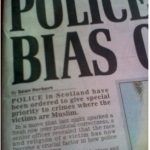 Please visit the link to see all the photos of this story, which is only extraordinary in the sense that it was publicly admitted to be true, while in the rest of the west it is likely a more secret policy.