Forced marriage’ doctor returns home to London after being kidnapped by her parents and says: ‘I forgive them’ 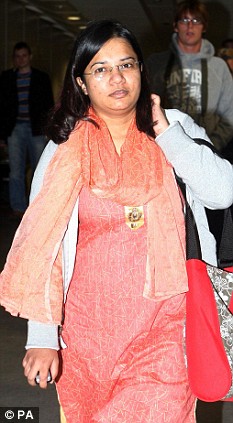 An NHS doctor held captive by her parents in Bangladesh arrived back in Britain today after a court stepped in to secure her freedom.
Dr Humayra Abedin, a trainee NHS GP, was allegedly bound and gagged and subjected to violent beatings during the four months she was held in Dhaka.

It is claimed she was kidnapped by her parents after she rejected the potential husband they had found for her in Bangladesh.
Dr Abedin was taken into the protection of the Bangladeshi High Court and handed over to the British High Commission to allow her to fly home to Britain.

Her Malaysia Airways flight touched down at London’s Heathrow airport at 4.47am today.
When asked how it felt to be home, she smiled wearily and said: ‘I’m exhausted but very happy to be home. The flight was okay but it was long.’
Dr Abedin was escorted to the passport control area by two police officers and airport officials. Dressed in a pink salwar kameez and yellow trousers, she kept her head down as she left the plane.

She was quickly escorted to a police car waiting outside the terminal.

Her lawyer representing her in the UK, Anne-Marie Hutchinson, said special arrangements had been made so she did not have to walk through the terminal when the flight landed.

She said the doctor has been left traumatised by her experience and will not go back into her London home.

However it is now highly unlikely Dr Abedin will be able to return to her home in Upton Park. She will instead be housed at a refuge to protect her from any potential threat from family members.

She said: ‘She is in a state of shock. She is having real difficulty in taking it all in. She won’t go home. I’ll be putting her in touch with some women’s groups.’

When the judge had delivered his verdict, her father Mohammad Abedin broke down in tears and began wailing while Dr Abedin, of Upton Park, east London, sat passively at the front of the court. 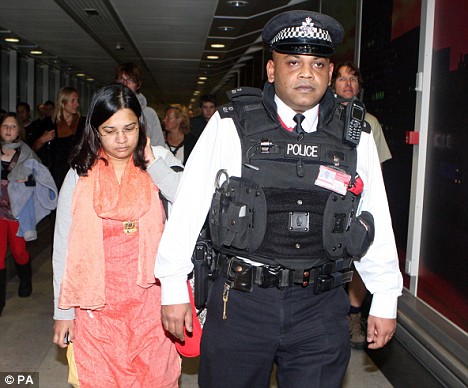 Dr Abedin was given a police escort through the airport

The alleged kidnapping happened in August when Dr Abedin visited Bangladesh after hearing her mother was ill.

Legal action began after her friends heard she was allegedly being beaten and held against her will.

Dr Abedin’s Hindu boyfriend in London said her parents assaulted her to get her to end their relationship and marry a fellow Muslim.

The software engineer, who is afraid to reveal his identity, became gravely concerned for her safety after the doctor made a secret call pleading to be rescued.

The 44-year-old Hindu Bangladeshi, who was living with Dr Abedin in East Ham, said: ‘She was begging me to help her.’

It is believed Dr Abedin’s parents fed her sedatives and admitted her to a hospital under false claims she was suffering a psychiatric illness.

Previously they had refused to bring the 32-year-old to court on five separate occasions, claiming she was mentally incapacitated.

As the court convened today there were fears she would again fail to appear. However, she was ushered in at around 11.45am amid much pushing and shoving. 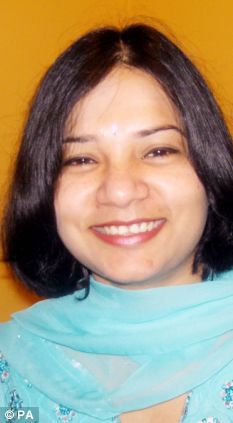 The NHS doctor in happier times

The court later ruled that Dr Abedin be surrendered to the British High Commission following a High Court ruling in London filed under new laws to prevent forced marriages and protect victims.

Justice Syed Mohmed Hossain said: ‘Children are not the slaves of their parents. They must have their own freedoms. If I were to reveal what Humayra has said in her statement then her parents would be in trouble. What I have heard reminds me of the dark times, the old ages we had in Bangladesh.’

He added: ‘She requested the court not to put her parents in trouble because of what they did to her.

‘But I am saying what you (the parents) have done to her is not acceptable. If there’s any further problem you will be in big trouble.’

The court ordered Dr Abedin’s parents to hand over her passport and she was given a police escort to the British High Commission.

Dr Abedin trained as a doctor in Bangladesh before coming to Britain in 2002, when she studied for a Masters in public health at Leeds University. She trained at Whipps Cross Hospital in East London and was due to start in a GP’s surgery in August.

Forced marriages remain commonplace in Bangladesh, activists say. The British High Commission in Dhaka said it assisted in 56 cases between April 2007 and March 2008.
Dr Abedin said she was ‘relieved to be free’, but added that she didn’t have any ‘bad feelings’ towards her parents.

A Foreign Office spokesman said: ‘Forced marriage is an appalling and indefensible practice that the government is working hard to stop.’

Lawyer Sara Hossain said: ‘The High Court has issued an order under the Forced Marriage Act that she must be released by her family and allowed to return to the UK.

‘She’s free to go, she’s been set at liberty and she wants to return to the UK. We’re delighted with the result, the rights of a Bangladeshi woman have been protected as they should be.

Dr Abedin came to the UK six years ago to study for a Masters degree in public health at Leeds University.

She had hoped to become a registrar at a GP surgery in east London in August but had returned to Dhaka after receiving news her mother had taken ill.