A few weeks ago or less, the Taliban issued a warning about music. That it would not tolerate the playing or performing of music in Afghanistan as it is against Islamic doctrine. Shortly after seven musicians ended up dead, apparently by accident. A few days ago, the taliban warned about females in school as thats also against Islamic doctrine. No woman or girl should be educated in anything except Koran. Now we see a massive explosion killing school children which the western press claims is also an accident intended to kill a group of tribal elders in a meeting. 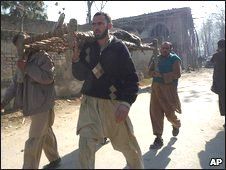 When will the western press stop apologizing for barbarism?

This is not the first attack on school children this week.

In fact the frequency is increasing. The Taliban is reasserting itself in all fields it dominated before the war. Oppression of all people and the total subjugation of women and imposition of classical Islamic law as set out in Koran and the Hadith. The Taliban has a war on education in general that does not support Islamic views or allows for diversity of ideas which may threaten supremacy of the Taliban itself. This would be pretty much anything we would call education at all.

Maybe the press finds the whole thing so surreal they can’t report it right. This I might have some sympathy for. More likely they are crippled by official enforcers of political correctness which do not allow the blame to be placed where it should go. Islam and Muslims.