I have discussed here in a variety of ways how the irrational left and even the general uninformed public consisting mostly of very nice people refuse to understand the nature of culture. They see it as wearing different clothing, eating unusual spices and playing pop music on wooden instruments of unfamiliar design.

In fact as this article from the Guardian shows, culture is the root code a human being uses to interact with his fellow man and his environment overall. When a blind man is told he cannot bring his dog into a restaurant because Muslims do not approve of dogs despite British guarantees in law that the handicapped must have access we have a true example of what culture is and means. Personally I believe a person who opens a restaurant should more or less have any rules he wants for it. Short of violating various health codes in food preparation and so on, they should be allowed to set what rules they want even including the smoking of cigarettes. But the law is the law and it must apply to all members of a nation or the very term nation becomes more than meaningless. It becomes the foundations of a civil war.

A blind man has been turned away from a fashionable Indian restaurant because his guide dog offended Muslim staff.

Alun Elder-Brown was barred from bringing his guide dog, Finn, into Kirthon Restaurant 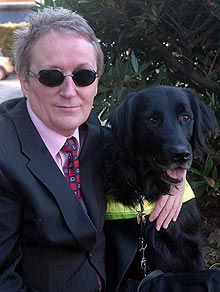 Alun Elder-Brown, a recruitment executive, said he was left feeling “like a piece of dirt” after being barred from bringing the animal into Kirthon Restaurant in Tunbridge Wells, Kent, on religious grounds.

The Guide Dogs for the Blind Association said the decision was illegal under the Disability Discrimination Act and Mr Elder-Brown, 51, is now considering suing the establishment in The Pantiles.

It follows a series of successful prosecutions of Muslim taxi drivers who refused to carry guide dogs in their cars because they considered them unclean on religious grounds.

Mr Elder-Brown was taking his girlfriend out to celebrate her birthday with her five year-old daughter last week when he was told he would have to leave his dog, Finn, tied up outside.

He showed a card issued by the Institute of Environmental Health Officers certifying he and his dog were allowed into any premises but an argument ensued and the owners threatened to call the police if he did not leave.

“It was humiliating and degrading, especially as there were a lot of people around me,” he said.

“I was made to feel like a piece of dirt. They told me I couldn’t come in because it was against their religious beliefs to have a dog in the restaurant.

“They then said I could leave Finn tied up outside. I stayed calm but when they threatened to call police I left.”

He added: “It was horrible. It put a dampener on the whole celebration.”

Under the Disability Discrimination Act it is illegal to refuse to serve a disabled person of give them a diminished level of service because of their disability.

Chris Dyson of Guide Dogs for the Blind said: “We are extremely concerned and disappointed that Alun was refused access to this restaurant.

“We very much hope that this restaurant will reconsider its decision and get in touch with the charity so that we can give them a better understanding of their requirements under the law and explain the important role that the guide dog plays for Alun.”

The restaurant’s owner, Amenur Abdussamad, was not immediately available for comment.