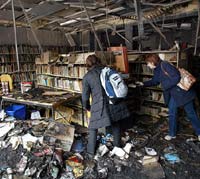 MONTREAL — Azim Ibragimov wasn’t charged with terrorism, but that’s what a Quebec Court judge called his crimes of firebombing a Montreal Jewish school and community centre.

The maximum sentence is 14 years.

Joseph Gabay, vice-president of the Canadian Jewish Congress, said the community was so traumatized by the attacks in 2006 and 2007 that some parents withdrew their children from the attacked school, Skver-Toldos Orthodox Jewish Boys School.

“The sentence is meant to denounce and dissuade,” Gabay said outside the courtroom. “Everybody should be aware that we’re living in a society where everyone is at risk.

“But people who unwillingly or willingly commit these actions should be aware that we have zero tolerance.”

Ibragimov, 25, pleaded guilty in April to three counts of using fire or an explosive to cause damage to property and one count of uttering threats to damage or destroy property. He has already served 19 months, which counts as double, leaving him just 10 months to serve. 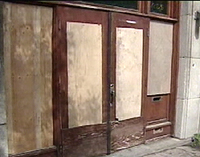 Omar Bulphred, who faces nine charges related to the same incidents, is back in court next month.

Police discovered letters penned by Ibragimov, a non-practising Muslim, which declared jihad, or holy war, and asked for the liberation of their “brothers” arrested in Toronto on terrorism charges.

Cadieux pointed out that Ibragimov once dated a Jewish girl, had no criminal record and had continued his studies while in prison.

Ibragimov, who read a letter of apology to the court at his sentencing arguments, had no reaction Monday when the sentence was rendered.

It was exactly the sentence Crown prosecutor Mario Dufresne had requested. Monday, he said it sends a strong message that such hate-motivated crimes won’t be tolerated in Canada.

“He deserved the sentence he got today,” Dufresne said outside the courtroom.

Cadieux didn’t buy the defence argument that Ibragimov was simply following the orders of his co-accused when they firebombed the school, a Jewish community centre and a parked car.

No one was injured in the attacks — the 200 students in the school had left just before the firebomb — and the damage to the school was minimal. In the case of the community centre there was no damage.

But Steven Slimovitch, of B’nai Brith Canada, said there is residual fear in the Jewish community.

“Every time there are acts like this, whether in Montreal or elsewhere, it affects the community.”