OTTAWA – An Ottawa university professor has been arrested for the infamous terrorist bombing of a Paris synagogue in 1980 that killed four, injured scores and put synagogues around the world on a tough new security footing.

Hassan Diab, 54, was arrested by the RCMP at an area residence Thursday morning as he was getting dressed and placed in custody at the RCMP’s “A” Division on McArthur Road, said his lawyer, René Duval. 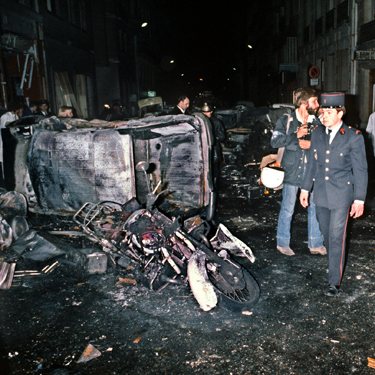 Mr. Diab is to appear in an Ottawa court Friday, where the process to extradite him to France is expected to begin.

A native of Lebanon, Mr. Diab obtained Canadian citizenship in the 1990s and teaches sociology and anthropology part-time at the University of Ottawa and Carleton University. In interviews last year with the Citizen and France’s Le Figaro newspaper, he denied any involvement in the Paris synagogue attack.

The Oct. 3, 1980, bombing on Rue Copernic, in the posh 16th district of Paris, was triggered by high explosives planted in the saddlebags of a parked motorcycle outside the building. The blast killed three Frenchmen and a young Israeli woman. Hundreds of worshippers gathered inside the synagogue for a Sabbath service were to emerge minutes later. No one claimed responsibility, but the Popular Front for the Liberation of Palestine-Special Operations was later blamed.

A file photo dated on Oc. 3, 1980 shows firemen standing by the wreckage of a car and motorcycle after a bomb attack at a Paris synagogue killed four people. On Thursday, the RCMP arrested a part time instructor at the University of Ottawa for his alleged role in the blast.

As one of the first contemporary terrorist strikes on a synagogue outside the Middle East, the blast led to the fortification of Jewish community sites across Europe and North America and a massive wave of anti-Semitism across France.

The break in the case came in September 2007 when German authorities discovered an old membership list for the now-defunct PFLP-SO, prompting a new French magistrate to reactivate the investigation.

A month later, Le Figaro, quoting unnamed sources, reported that French authorities suspected Mr. Diab was the leader of the small commando team responsible for the attack and asked Canada for assistance with their investigation.

The French magazine L’Express reported Thursday that a team of French police, magistrates and intelligence officers have been in Canada working on the case and would try to arrange Mr. Diab’s extradition to France.

French investigators suspect the bombing was organized by the small Palestinian militant group, which was at odds with Yasser Arafat’s Palestine Liberation Organization, the magazine said.

After the blast, police issued a composite sketch of a young man with a moustache who had parked the motorcycle in front of the synagogue. They also traced two fake Cypriot passports the man was believed to have used. Investigators also are said to be in possession of hotel bills and traces of blood found in a rental car believed to have been used by the bomber or bombers.

The main Popular Front for the Liberation of Palestine group, blacklisted by the Canadian government as a terrorist group since 2003, is described as a secular Palestinian group, purportedly guided by Marxist ideology, that is responsible for the 1968 hijacking of an El Al flight en route from Rome to Tel Aviv, as well as car and suicide bombings in Israel.

Citing French jurisdiction over the case, the RCMP Thursday refused to confirm Mr. Diab as the arrest suspect, though a justice department official did confirm his arrest. The RCMP would only say an individual was taken into custody at a Gatineau address under what a government official said was a provisional extradition warrant. The warrant was executed as part of the Mutual Legal Assistance Treaty at the request of French authorities

Soon after details of the renewed French investigation were reported last year, Mr. Diab issued a statement to the Citizen through his lawyer, stating he had no involvement in the bombing, no criminal record and was never a member of the Palestinian group or knew anyone associated with the group. Nor, he added, has he been active with any other militant organizations.
Email to a friendEmail to a friendPrinter friendlyPrinter friendly
Font:

Mr. Duval at the time said his client was open to meeting with French authorities for questioning in Canada, in accordance with Canadian legal process, but that offer was never accepted.

Though he visited a cousin in Paris roughly a year or two after the explosion, Mr. Diab said he only learned of the bombing when a Figaro reporter approached him last fall at the University of Ottawa. He is now in his second year of part-time teaching there, with one bachelor-of-arts-level class. A university spokeswoman said the school had no official word of Mr. Diab’s arrest and could not say what, if any, actions it might take as a result.

His credentials include a PhD from Syracuse University in New York state and an assistant professorship at the American University of Beirut. He earned his bachelor of arts in his native Lebanon in 1982 and, in 1999, wrote Beirut: Reviving Lebanon’s Past, about the history of the country’s capital city.

He reportedly arrived in Ottawa about two years ago, after living for several years in Winnipeg, and is married with two grown children from a previous marriage. His lawyer said he understood Mr. Diab lives in Ottawa and could not explain why Thursday’s arrest took place in Gatineau.

After the Citizen reported on the case last year, Mr. Diab began being closely followed and “systematically harassed” by unknown individuals who followed him on foot and by car, Mr. Duval said Thursday.

“We reported these incidents and licence numbers to Ottawa police and they were never able to find anyone,” he said, adding he believes Israeli agents may have been responsible.

Bernie Farber, CEO of the Canadian Jewish Congress, applauded French and Canadian authorities for their work on the case, though he stressed the allegations against Mr. Diab have yet to be proven in court.

“The importance of this case is that authorities are giving a very strong message, letting people know that terrorist acts, no matter how long ago they were committed, remain a very serious matter and justice will be brought in the end,” he said.