I am late posting anything on this as I wanted to metaphorically at least let some of the dust settle on the attack before I posted. Ideally, I wish to speak about things that will and are happening as ongoing evens on this blog and on attacks such as this one I prefer to wait till some decent data is in to post it as well as add hopefully some meaningful commentary. One thing is certain. Islamic terrorists are easily able to attack highly sensitive targets within the heart of Pakistan. Something they where not able to do under Musharaff. In fact, since Musharaff left office we have seen attacks on the Danish Embassy in Islamabad as well this Marriott hotel attack, one which used over 2600 Lbs. of military grade explosives, (this itself is meaningful) and one which was within a few miles of the Presidential house while a high level cabinet meeting was taking place. An excellent analysis is available on Stratfor.com and for members is well worth reading.

Below are various articles. I will update as good ones become apparent to me. I believe the thing to note is, this is not an isolated incident. We can expect more attacks, more frequently and more vicious both within Pakistan but in India and Afghanistan as well.

I also would reasonably expect one outside of this theater altogether and in the west in the foreseeable future. 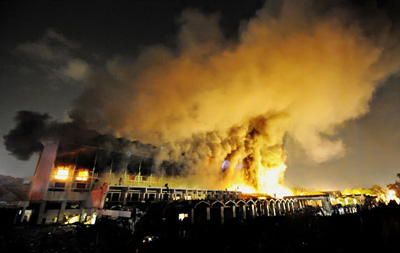